[Po-Eui-Gyo-Jip] is a novel in Gyujangkak, describing love and trouble whose the noble man, Lee and Cho-ok(who lived in servants` quarters) in late Chosun(Kojong period, after 1866) By the way, this work is very particular because it`s main material-acknowledgement of another person is unfolded by the female character. General feature of the Romance is pursuing acknowledgement of another person. When it is said that the romance reflects a desire of intellectual literati, it is natural that the desiring subject is intellectual literati, and he is expressed as the male character(the hero) who looks for another person who acknowledge oneself. But the desiring subject is a woman(the heroine) in this novel, and the object(lee-seng, 李生) is vulgar man who isn`t coincided with the subject`s desire. In this way, It is very wonderful, in history of the romance, that a acting subject is a woman, and she`s pursuing miss. And it is a result that the 19th changed the state is intervened. In the aspect of techniques of expression, [Po-Eui-Gyo-Jip] makes Lee-seng `focalizer`, therefore shows his negative soul. and for Cho-ok(Yang-pa), it makes her the good man by frequently quotation those around one`s remark. But, moreover, a reader feels that a narrator doesn`t support perfectly Cho-ok, by concluding she`s pursuing target isn`t valuable. [Po-Eui-Gyo-Jip] is changed a desiring subject to a woman(the heroine), and an object is described very vulgar, and she`s pursuing miss. So I think it is critical parodied Romance(critical parodied work of the Romance) 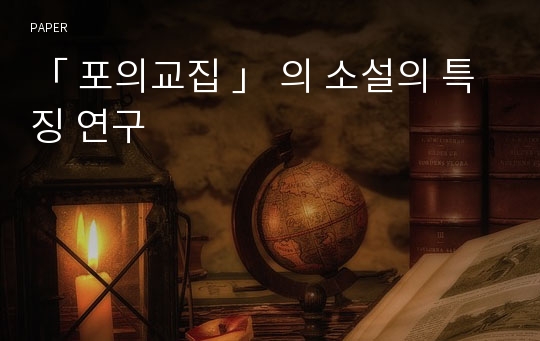