This thesis is to bring light on the characteristics of government officials` literature of the fifteenth century. In some other way of both the first stage when pressed with building key points for the country and the latter period when facing the political power transferred to the party of Sarym, since the middle of the fifteen century came the times for the government officials` literature, supported by the King Sejo who maintained a strong power and the King So˘ngjong who was fond of study. At those times were such influential representative literary men as Kim Soo-On, So˘Ko˘-Jung, Lee Seung-So and Kang Hee-Mang. They all agreed with the `Jae-do theory and recognized the necessity of literature under the predominance of morality, which is regarded as the different characteristics from the Jaedo theory from the end of Koryo˘period to the beginning of the fifteen century. This thesis explains what moral utilities, based on the speculation of neoconfucianism(So˘nglyhak), is included in Kang Hee-Mang`s poems, who was a government official and literary man in the middle of the fifteen century, under a whole outline of government officials` literature. Kang Hee-Mang emphasized literature on the value of leading the world to the right direction in the succession to the tradition of Jaedo theory and, therefore, insisted literature should function as a tool for holding something which guided the world to a right way and helping kings` virtue. He hoped that his poems could help build Confucian ideal world, and assumed that it would make poetry not treated as a trifle art any more. From this point of view, his poems naturally came to held the nature .of both controlling the world which might be helpful in improving the moral fiber and `Kwanpung` which was to look around public morals over those times. If the morality was considered as an universal order, based on the theory of So˘nglyhak, the literature itself was just recognized as something necessary to realize it. This suggests a different idea from the previous one that literature came to be given a high position for the purpose of contribution to highly admire the world already embodied by the theory of So˘nglyhak. However, the officials who were responsible for the stableness of king power and cultural affairs for the establishment of `Ye Ak(禮樂)` in the process of his practice, noticed the need to lessen tensional spirit. And this was as a whole realized through travelers` journals, paintings and planting flowers and herbs. But, they have strongly excluded all of those which make themselves lose the neutral status through appreciating things. Instead of giving pleasure to both ears and eyes in the pursue of pleasure, they tried to reconsider themselves which realizes `Jonyang Sungchal(存養省察)` and `IshinYangseng(怡神養性)`. This proves the fact that the officials tried to harmonize their life as governing people with life as purifying themselves. Moreover, it is an example which shows that his poetic spirit is equally applied to talents in paintings and other noble hobbies. In addition, he liberally expressed his wanting to escape from government services` fetters by writing poems when he was criticized and impeached. In this case, the themes of the poems were sadness and wanting to go back to rural life. These themes cannot be explained by `Jae-do` theory which is useful in making the world right. However, they form a great category of the volumes. For `Kang Hee-Mang`, in this point of view, Chinese poems could be appreciated to be having both public functions such as productive tool-possessing something which makes the world right and helping king`s virtue and private function which comes from expression of emotion and riddance of suffocating which comes from expressing outwardly without constraints. 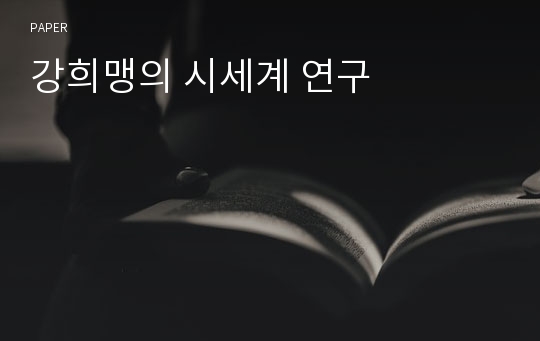