This paper is studying the poetic and literary view of Maegye who was a writer under the rule of Choongjong of Chosun dynasty. Chowi, whose pen name is Maegye, was a descendent of a distinguished family in late Koryo and early Chosun dynasty. And he was both a husband of a sister of Kim chongjik, whose pen name was Cheombokje and who was one of the leaders of a new school, named Sarimpa, and student of him, too. As one of the members of this new school, he was based on Cheoluisasang(節義思想) and Practical Confucianism(實踐留學) but at the same time he was a Kwangakmunin(館閣文人). Neoconfucian, a theoritical background for the foundation of Chosun dynasty, became very common thanks to the encouragement of the study of Chinese classics of previous kings and the prevalence of imported chinese books. Basically both Hoongupa and Sarimpa were based on confucianism. Their final goals were same, even though their ways were different. Hoongupa(勳舊派) was absorbed in Sajanghak(詞章學) which was one of major subjects of science and they thought it`s important to be energetic and abundant in literature. On the contrary, Sarimpa has a view of literature which wanted to picture the truth in human beings and nature. They thought that literature was based on the words of Confucious(經術) and once they got good at the words of Confucious, naturally they got good at poetry, too. Maegye`s view of literature was same with that of Sarimpa. He thought a writing was a way to show one`s completion of personality(德). He regarded Doobo(杜甫) as a model in poetry and thought he could be like Doobo through Sodongpa. So he followed Sodongpa and he was very generous about using other poem`s good expressions with the effect of Kangseosipa(江西詩派)-Sodongpa was the leader of it. 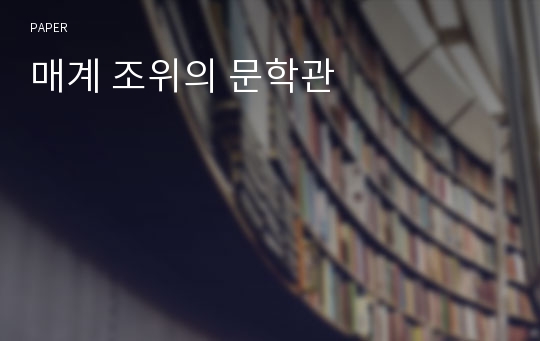