The purpose of this thesis is to examine the literary characteristics and position in literary history of the literature of Kyoungjung, a poet in the middle age of Chosun by having a critical mind for his some poems with different features from the other poems in those days and generally by reviewing his poetry. Kyoungjung is the man who lived in a historical turning point through the reigns of Sunjo, Kwangheagun, and Injo. He lived a life full of ups and downs, suffering from Japanese Invasion of Korea in 1592, visiting Peking twice as an envoy, and being restored in the service after leading a long leisurely life after being driven away from office and specially war, and visits to Peking are understood as having much effect upon his studies and literature. He adhered strictly to the spirit of gentleman and the attitude of knowing contentment and was a practical intellectual who strived for saving his nation in turmoil. And aiming at `not being restricted by past but being used in present`(不泥于古 能通于今) in his studies and literature, he was figured out to be a literary man who devoted himself to the philosophy of human nature and natural laws(性理學) but was interested in changes in studies and poetry that were springing up at that time without being buried in the traditional thought and accepted them. Also, in his theory of literature, he discerned the leaven of these changes and innovations and applied them. That is, he regarded the mystery of nature(性情之妙) or the frank emotion with which he attached importance to the righteousness of nature (性情之正) in the meaning of moral philosophy as the essence of poetry and prose, pursued the original spirit of creation as `not being restricted by past but being used in present` which bears a profound secret of nature(天機) and asserted the criticism in which he was never biased by a fixed trend of poetry. And it is found out that his poetic works in which his theory of literature was reflected well are very characteristic and different from other poems at that time. Kyoungjung`s poetry has very various and originative worlds of poem. First, in the poems with a mood of leading a leisurely life he expressed an inner sense of Knowing contentment and the interest of rural life and it is figured out that he somewhat got out of ethical ideality in that he expressed frankly the figure of his life, In his poems with the love for his countrymen, his cognizance of the realities of life based on actual conditions is found out in that he expressed the situation of his countrymen who were suffering in confusion of internal and external troubles of his country and the position of public officials at the same time, and represented the situation of those days, as it was. The poems which reflect daily events show various and novel materials and realistic descriptions characteristically and these materials are descriptions appear in the poems of life which can be seen in the literature of the latter age of Chosun, and in this point, an aspect of his literary spirit which was ahead of his days can be seen. In his poems in which he wrote about the experiences in visits to Pecking as an envoy, he expressed his feelings and knowledges about the visits. And there are many poems he exchanged with the envoys who traveled with him and the chinese poets, which show his original spirit of poem in which he observed sharply and expressed objectively the fresh facts with which he contacted in foreign country. Like the above, the poetry of Kyoungjung is figured out to be very various and original in materials and expressions from ethical poems to the poems of life which bear the characteristics of the literature of the latter age of Chosun. It was understood that it was because he carried out the essence of poetry and prose and the creative originality which he maintained through his theory of literature and that it came from his practical attitude in studies without turning away from the realities 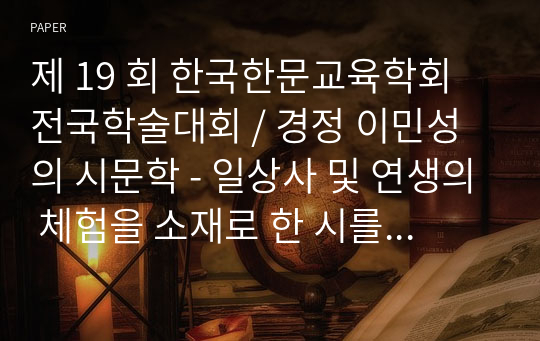