This thesis has been examined concretely the Pangsan Yun Jeong-gi(1814∼1879)`s poetry. Pangsan was one of the eminent successors of Tasan study(茶山學). Pangsan`s study and literature had close relations with his maternal grandfather, Tasan(茶山)`s. For example, Pangsan wrote 《Tong hwan rok(동환록》, historical and geographical book written adding his historical and geographical view. It was based on 《Kang yeok ko(疆域考)》 written by Tansan. In addition to, he wrote about 《The Book of Chinese Classical Poetry(詩經)》 based on his transcript of lectures from Tansan. From these features, we could see the fact that he played the important role in the course of development, and transfiguration of Tasan Study. Having 23 poems in 《Collected Poems of Choya(朝野詩選)》 and 8 poems in 《Collected Poems of Taetong(大東詩選)》, he must have been one of the most, import poets in those history of literature. Only two or three pieces of other poet`s poetry were found in those anthology published in 1917, but he was the 11th of 223 poets. Because of having much poetry in those anthology, he looked upon as one of the most important poets in the history of literature of the latter Chosun(朝鮮) dynasty. Up to the present, 475 his poems were remained. As the result of studying of Pangsan`s poetry, reminiscence poetry(懷古詩) was the most prominent of all. Having traveled several times, he had expressed his knowledge about historical fact acquired in the course of traveling in poem. Through these poetry adding notes, he had expressed the thoughts of loving and concerning about history and national consciousness. <Reminiscence poetry of Kyonam(嶠南懷古)> formed several poetry had the loving about Korean history and culture represented in 《Tong hwan rok(동환록)》. Apart from artistic perfection, it must be worth notice. From the point of his overcoming individual and social adversity, creative consciousness contained in those work is preeminent. 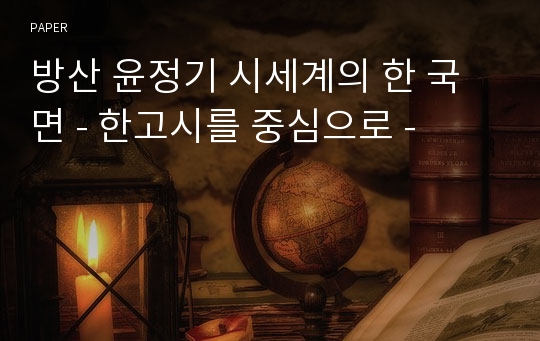