Lee Eun-zuk(1491-1553) lived in the era of politically and socially moral loss period during his life time as much as he encountered fourth times` massacre of scholars. Therefore, he was devoted to the moral philosophy having an intention of saints learning through his career, tried to lead his moral new life, and tried to incorporate his literature of his own learning, thought and moral philosophic reason as moralistic point of view. We could understand that his moral philosophic living contributed to understand his literature as central role, and work that frankly figuration his moral philosophic ideology was the mainstream of his poetries. He tried to pursuit of the seismic center of the laws of nature with endless introspection and moral training spirit together with harmonize with the nature by shaking off discord of mind, and by connecting meditative mind, and the learning toward the things as organically, he wished joyness of myung-ri-sung-do and that, Lee Eun-zuk tried to form his view of the world and universe through the harmony of the nature. Lee Eun-Zuk, by diverting the pure mind that attained through perceiving natural laws to the poem as it is stands, he opened new aspect of the literalization of the moral philosophy, and discovery of the natural beauty in the nature, together, and that he experienced "SUNG CONFUCIANISTIC" desposition in it, and he broadened literary sphere by newty establishing confucianist`s recognition of poem. 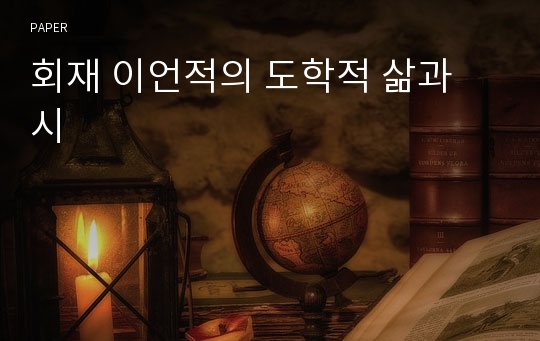