A Study on the Concord Phenomena in Spanish

With regard to the agreement between the subject and the verb, the normal rule is that a singular subject agree with the singular verb and the plural verb does with plural verb. However, in reality it is not easy to decide which word is singular or plural in a sentence. This difficulty often occurs in the case that, although the number of a word is singular in form, many Spanish speakers attempt to consider it as the plural. For example, when the subject is a collective singular, the verb must be in singular by external form. But considering their sense of collectivity or the duality of the collective noun, the verb can be used in plural. Therefore, a problem arises on how to explain agreement relation between the syntactic and semantic level. I propose that, following the opinions of Quirk, Greenbaum, Leech and Svartvik (1972), the concord phenomena can be explained systematically in combination with the syntactic and semantic aspect. To examine the contemporary trend in Spanish verb agreement, I will search several Spanish data. On the basis of the data, I will argue that the grammatical concord and the conceptual concord must be in harmony together in order that the concord phenomena can be explained satisfactorily. 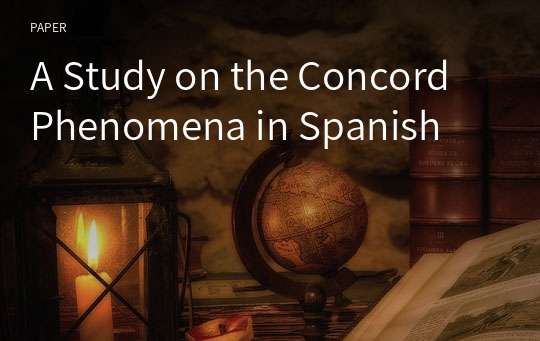