In this paper, I investigate Jeong Yak-yong``s lifelong studies on the Works of Mencius and examine the contents and character of his academic points of view. The main arguments are as follows: CD Jeong Yak-yang``s fundamental orientations in studying Confucian classics, as were summarized into his intense reality-oriented and practice-oriented inclinations, had been deepened and developed consistently throughout his life. (R) Jeong Yak-yong had studied and reinterpreted Confucian classics including the Works of Mencius extensively and ambitiously. Through such intellectual efforts, he dismantled and reorganized the Neo-Confucian world view thoroughly, which had backed up the government structure of the Chosun dynasty ideologically, and constructed an alternative world view of his own, which formed the basis of his reform-oriented statecraft. (R) Jeong Yak-yang had developed criticism about social realities of the Chosun and assimilated it into his reinterpretation of the Works of Mencius actively. In conclUSion, it is estimated that Jeong Yak-yang:, studies on the Work, of Mencius reflected his critical mind refinedly, aiming at anti-escapism and the reformation of the ancient regime of Chosun. 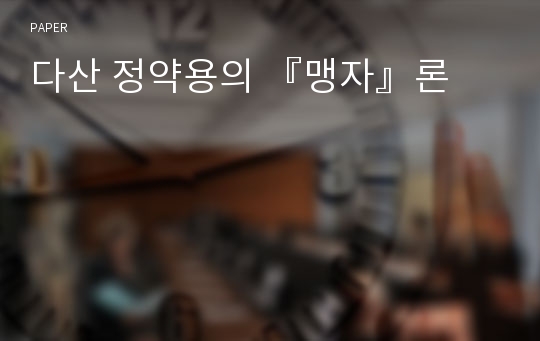