Introduction:?Fecal microbiota transplantation (FMT) was a treatment option for recurrent and refractory pseudomembranous colitis (PMC). However, due to a lack of research on the FMT, protocol and complication is not clear. We have experienced 6 FMT cases. As below, we describe 3 patients with unsatisfactory FMT result.?Case 1:?An 87-year-old man was tranfered to nephrology with recurrent UTI. After use of antibiotics, diarrhea was continued and Clostridium difficile(C.difficile) toxin test was positive. PMC wasn’t improved by metronidazole and oral vancomycin. So, we performed FMT with 200 g of fresh feces via gastric Tube. We wanted to perform FMT via jejunal endoscope, but, it was not available in our hospital. Diarrhea was improved immediately after FMT, but aspiration pneumonia was developed on both whole lung and cured with meropenem. Despite of using antibiotics, PMC didn’t recur.?Case 2:?An 89-year-old man complained of mucoid diarrhea after treatment of cholecystitis.Symptom was not improved by casual management, even aggravated. So, we performed FMT with small amount of feces via colonoscopy. After FMT, septic condition was improved but diarrhea was relapsed within days.?Case 3:?An 88-year-old man was in septic shock state with diarrhea and abdominal distension.He showed positive result of C.difficile toxin and toxic megacolon on simple abdomen image. Symptom was not improved by metronidazole, oral vancomycin and vancomycin enema even though by tigecycline. We performed FMT with 200 g of fresh feces via colonoscopy and maintained tigecycline. After FMT, septic condition was cured but diarrhea and colon dilatation were only partially improved.?Conclusions:?We can suggest that FMT via gastric tube has high risk of aspiration pneumonia and enough feces are important for successful FMT. Lastly, continuous use of antibiotics can impair the effect of the FMT. FMT is unfamiliar to patients and their family yet. But, it is very effective treatment of PMC despite its complication. We hope that various situations with FMT support more advanced management on PMC. 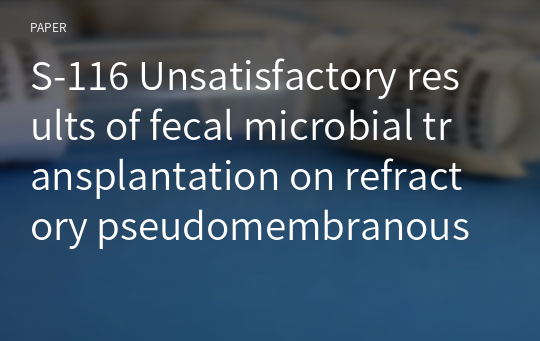