Written in the style of a classic Gothic novel, Susan Hill`s The Woman in Black (1983) has been critically applauded as ``the most celebrated ghost story of modern times`` and made into a stage play, TV drama, and feature film. This old fashioned Gothic ghost story begins with a retired elderly man, Arthur Kipps, and his family gathering and sharing ghost stories in front of a roaring fire on Christmas eve. Instead of telling his story aloud too terrifying and disturbing to be told, however, the narrator writes his horrific experiences in which as an up-and-coming young solicitor, he went on a business trip to a faraway small English town in the windswept salt marshes haunted by a menacing specter, ``the woman in black.`` From a socio-historical perspective, this paper concerns the cultural significances of ``a poor, crazed, troubled woman in black,`` an unmarried mother who died of grief and distress in the Victorian era but keeps returning in a demented, sinister, creepy spirit form in the Edwardian era. Especially, considering Thatcherism in the 1980s when the novel was first published as well as the Victorian and Edwardian eras in which the novel is set, this paper explores the ways the novel featuring the gothic presence of mystery, supernatural, dark aspects of life represents social fear and anxiety in terms of vengeful mother, rational father, and communal silence. 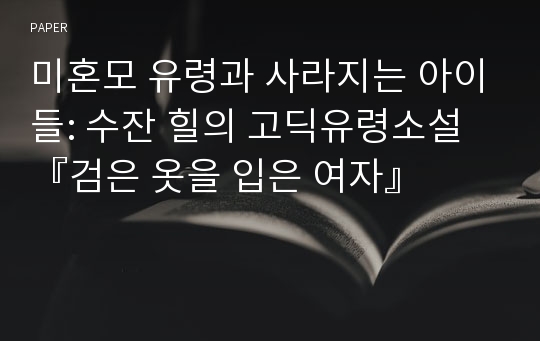