The purpose of this paper is to contextualize and analyse Mary Paik Lee`s life writing, Quiet Odyssey: A Pioneer Korean Woman in America (1990), from two perspectives: the autobiographical narrative as a subject of history, and the historiographical narrative as a social commentary, heavily editied by historian, Sucheng Chan. In sixteen brief chapters, this energetic and determined optimist recounted the vicissitudes of a poverty-stricken Korean woman growing up in California with a long history of anti-Asian sentiment and practices during the first half of the 20th century. Although it is significant because of the scarcity of such works by Asian women, as well as by one of six hundred Korean women who came to the United States before 1905, it is clearly a sanitized memoir that Lee wanted "to pass down to posterity." It is very conspicuous that awareness of the harsh existence of family and community members back in Korea under Japanese colonial rule profoundly shaped the nationalism of Korean Americans. On the other hand, Mary Paik Lee is very keen on racism, rather than sexism, influenced by her lifelong experience in California. The detailed appendices describe the process by which Chan tackled and verified Lee`s manuscript, explain how the Lees actually farmed their land, and briefly summarize Korean rice cultivation in California from 1910 to 1925. Such a strong historical verification makes this autobiography the most prominent and reliable historiography among the early autobiographical narratives by Asian American women. Therefore, readers are able to gain a much better sense of the lives of Asian American women in rural California, through sustained glimpses of their arenas of struggle and survival. In short, Quiet Odyssey is an important contribution to Asian American history because it provides an insider`s perspective on women and Korean Americans, both of which comprise an increasingly significant dimension of the Asian American experience. Furthermore, it reminds us of the continued importance of collecting personal narratives and documenting life stories-to preserve the complex details of women`s lives. 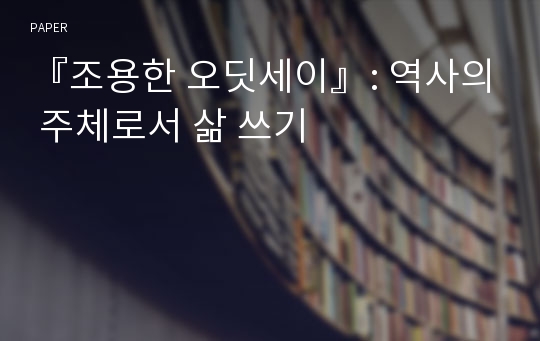