Margaret Cavendish`s Sociable Letters is not a collection of her letters to real persons but that of her fictional letters to an imagined female addressee. Cavendish discusses a variety of social, political, and cultural issues with the addressee, and her letters can be read as a critical epistolary conversation. As early modern English women were generally unable to participate in political events and public discourses, they used letters as a medium of self-expression and social interaction. Letter writing was for them a self-conscious activity through which they intervened in a masculine world of learning and constructed an alternative female discursive community. Cavendish gives advice on love and marriage, discusses political issues, and criticizes literary works in her letters. I pay particular attention to the way in which Cavendish constructs epistolary space as a form of theater. In this epistolary theater, I contend Cavendish builds an intellectual female network, constituting women as reading and writing subjects. Though her letters are fictional, it is crucial that they are not one-sided interchange but mutual, intersubjective cultural practices. Ultimately letter writing is for Cavendish a creative, rhetorical strategy designed to generate a reading public that responds to a wide variety of her thoughts and writings. 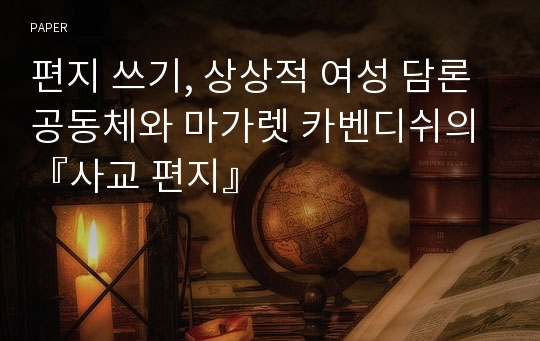