Observing how some female science fiction writers deal with sexuality and love in the technoscience age, this essay proposes a new genre of science fiction-that is, female science fiction romance (female SF romance). While most of the SF writers tend to present human-like robots as threatening and monstrous figures, some SF female writers, such as Anne McCaffrey, James Tiptree Jr., Shariann Lewit, and Tanith Lee, endow them with partnership in human evolution. Following the narrative structure of popular romance novels, the female SF writers represent the partnership as love between humans and robots. Love with robots they depict explores not only women`s sexuality and desire in help of technology unlike traditional romance narrative, which expands and reinforces women`s gender roles as good wife and good mother, but those of the posthuman that is seamlessly interconnected with technology. Analyzing romances in female SF romance texts, the essay argues that for the posthuman, love is no longer a transcendental and metaphysical concept, but a transformative power that operates through interconnectivity and interactivity with the Other. Posthuman love with the transformative power, the essay suggests, is an ethic for the posthuman to live well with technoscience. Indeed, in our posthuman environment where many scientists and sociologists expect that love, as a sexual and emotional communication, with robots will be realized soon, female SF romance is a valuable text to portray the direction of the posthuman`s emotional evolution. 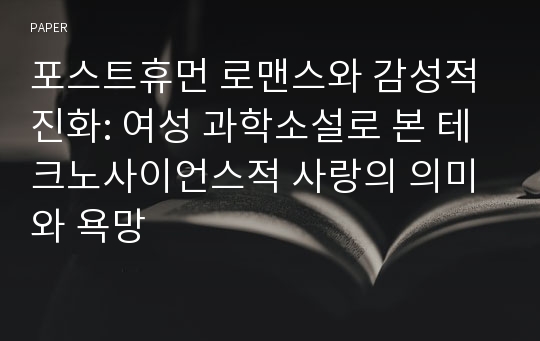