Is it linear or quadratic relationship between intentions to leave the job and its antecedents in luxury hotels?

The aim of this study is to assess whether the relationship between intention to leave the job and its antecedents is quadratic or linear. To explore those relationships a theoretical model (see Figure 1) and eight hypotheses are proposed. Each linear hypothesis is followed by an alternative quadratic hypothesis. Findings from the analyses of 884 responses representing the staff of luxury hotels in India suggest that the effect of two antecedents i.e. job security, earnings and organisational loyalty were found to be linear. The two other antecedents i.e. organisational enthusiasm and stimulating job confirmed a quadratic relationship with intention to leave the job. Though one result suggesting that excessive salary or job security is no assurance to decrease staff turnover has been somewhat surprising. These results are unique within the context of human resource practices in the luxury hotels in India. 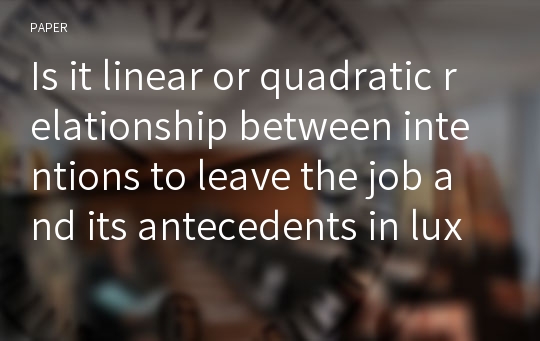