Imperialist Ideology`s Pros and Cons of McDonaldization in Korean Tourism

The terms of McDonaldization, Disneyization, Coca-Colonization are very common topics in sociology, anthropology, marketing, and so on. Furthermore, globalization is inevitable in current society. However, the impact of imported culture on the traditional and local culture in tourism field is very rare. For example, the imported food culture (McDonald), for sure, can provide many positive impacts on consumer`s need and satisfaction. However, like doubleedged sword, the imported food culture equally provides negative impacts on traditional Korean street food businesses such as those restaurants that sell the Hodduk, Bung uh Pang, etc. The primary purpose of this study was to investigate the consumer`s different perception toward pros and cons of McDonaldization with the cultural imperialism perspective. This study used the Berry`s bi-dimensional acculturation orientation studies (1980,1997): 1) maintain their original cultural identity (Yes or No) or 2) adopt the main/new society culture (Yes or No). Based on the previously stated acculturation orientation, there is a four-way classification: integration, assimilation, segregation, and marginalization. Data were collected in an eastern side of South Korea which is located near various destinations (a historical culture theme park, a water park, an amusement park, etc). 260 tourists, who visited these parks during June 2015 were participated in this study. Two-way ANOVA and 8 X 2 factorial analysis were utilized to analyze the data. Based on the results, the group of participants who had a positive perception toward McDonaldization indicated that " McDonald`s food is fast so it can save my time; the food is suitable for one person or small sized family (2 people); Convenient ordering; love Drivethrough; the food is consistent regardless of the location; and the menu is very similar regardless of the global location." This group mainly mentioned the convenience of McDonald`s food. Simultaneously, this group shared their negative perceptions about McDonald such as "hiring temporary workers at minimum wage; Icon of low income part-timer; limiting a full-time opportunity." The other group having a negative perception toward McDonaldization indicated that " McDonald`s food is unhealthy; the food is too fatty to eat; they use low quality meats; and many preservatives and chemicals in it." This group primarily mentioned the unhealthiness of the food. However, this group also positively mentioned that McDonald`s community outreach and effort such as Happy Burger (sending breakfast meals to special troopers), supporting youth soccer program, campaign for fighting obesity, and so on, can positively influence the McDonal`s image. In conclusion, South Korean consumers relatively have a positive perception toward Westernization such as convenience and meeting the younger generation`s diverse needs. However, surprisingly, the responses related to the cultural imperialism such as destroying the market for traditional street foods and Americanization were very rare among participants. 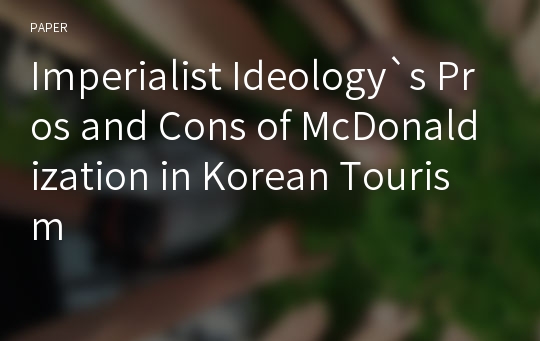