This paper aims to study a group of representative Old English Anglo-Saxon poems classified as elegies. These poems (“The Wanderer,” “The Seafarer,” “The Ruin,” “The Wife’s Lament,” “The Husband’s Message,” “Deor” and “Wulf and Eadwacer” in the Exeter Book) share common thematic characteristics such as a pessimistic view of transitoriness, mutability of human efforts, exile, isolation from the loved ones, the ubi sunt motif and stoic endurance to hardship. However, Anglo-Saxon poetry is not only pessimistic and tragic, but also demonstrates substantial Christian influences such as the vision of Christian kingdom, eternal joy in God and spiritual growth in heavenly blessing. Such a weaving of opposite philosophical veins (Christianity and Teutonic paganism) offers the modern reader a rich and wide literary spectrum and cultural context in the understanding of the Anglo-Saxon elegiac poetry. For close analysis, this paper has carefully examined diverse aspects of the poems such as thematic unity, imagery, poetic structure, psychological depth, moral and religious vision, elegiac beauty and poetic realism. (University of Ulsan) 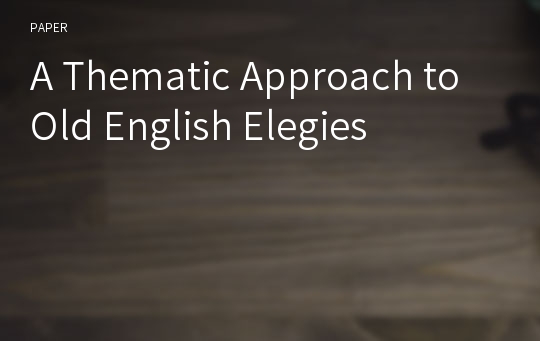