An Intercultural Exchange Project Between KFL and EFL Students

I. Introduction
II. Literature Review
III. Methodology
1. Participants
2. The Project
3. Data Analysis
IV. Results
1. What are the students’ responses to the first Facebook task, word association, and their reflections on the task?
2. What evidence is there of ‘intercultural competence’ represented by speech acts in synchronous online chats?
3. What is the students’ overall experience of the project?
V. Discussion & Conclusion
References
Appendix

With the advent of technology, telecollaborative projects have emerged that enable learners to interact with native speakers of the target language, helping them to improve both language proficiency and intercultural communicative competence (ICC). One long-lasting project is Cultura, which has been successful because of its pedagogical qualities, such as a task-based approach and collaborative learning (Furstenberg & Levet, 2014). In this study, a Cultura-inspired project was designed to foster interaction between students of Korean as a foreign language (KFL) residing in Australia and students of English as a foreign language (EFL) residing in Korea. ‘Facebook’ was used for asynchronous communication, and ‘Kakao Talk’ and ‘Facebook’ messenger were used for synchronous online chat. In order to suggest a model for designing and practicing future intercultural projects, this study focused on demonstrating the procedures for each task and examining evidence of ICC in the students’ interactions, as represented in speech acts. This study also investigated the students’ experience of the project, using surveys and interviews. The findings suggest that the students showed limited knowledge of their target culture in a word-association task on Facebook, but that their online interactions provided evidence of ICC, for example curiosity, and reflection on their own culture. Most of the students enjoyed the project, especially the online chat. However, the participants mentioned issues, such as the limited number of online interactions and lack of in-class discussions. For future practice, the use of various modes of communication and the desirability of balancing proficiency levels in the target language are discussed. 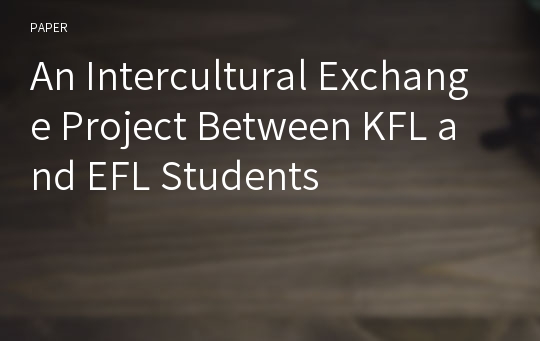