Ekuni Kaori is female writer who leads current Japanese literature, and ranges with Yosimoto Banana and Yamada Eimi. The novel Between Calm and Passion (1999) which was co-written with Tsuzi Hitonari, the writer of Akutagawa Prize, became million seller and attracted attention. Ekuni Kaori is a novelist and she shows various appearances of writer of juvenile stories, translator, poet etc. The most noticeable thing of Ekuni’s profile who made debut as a children’s storywriter in 1987 is aspect as a popular narration writer. It is noticeable that Ekuni Kaori awarded Naoki Prize (直木賞/2004), which is the most authoritative in Japanese popular narration. Another thing is the popular attraction that appears in making movies of her four novels. Making films with scenario of a popular narration means that there are lots of aspects of communication with ‘reality’. In this article, the reason that want to see an aspect of current Japan’s narration of youth through Tokyo Toweris due to her literature’s ‘reality (nowness)’. "The saddest scenery in the world is Tokyo Tower in moistened by rain." this novel started with this beginning is a family narration that is mixed with youth narration, affair narration and symbol narration of Tokyo Tower. Toru and Joji are wandering youth. Their lives are in contrast, however there are common. The main character, college student Toru projected Tokyo Tower in rain which is seen at the apartment living with his mother to his heart as a sad scenery. How do Korean readers read youth narration that is projected a shadow over Tokyo Tower that is the landmark and heart of Tokyo, the world’s big city. This article took note of this, and note to the narration way that is set up in pairs in the style of two youths · two married woman · two couples’ affairs · two empty family, so it is comprehended the emptiness of Japanese people that is suggested by conflict narration and examined the possibility of Japanese popular narration. 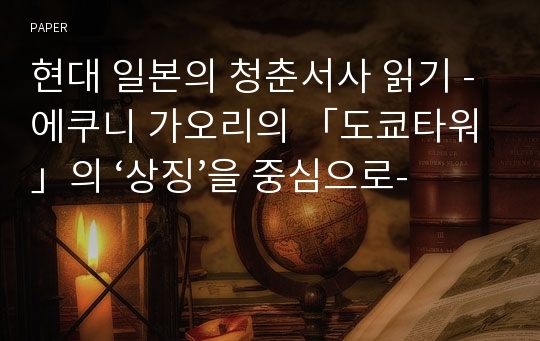