SOCIETAL MARKETING STRATEGY IN ASIAN MARKETS: A COMPARATIVE STUDY OF THE KOREAN AND CHINESE MARKETS

Consumers who play a key role in the Marketing 3.0 era tend to prefer socially responsible firms to profit-seeking firms. Hence, when creating a vision statement or setting a goal, firms make an effort to project an image of someone who cares for human and societal values. When managing relationships with consumers, many firms actively engage in various societal marketing activities and try to elicit positive responses from consumers. An example of such an activity is cause-related marketing (CRM), “the process of formulating and implementing marketing activities that are characterized by an offer from the firm to contribute a specified amount to a designated cause when customers engage in revenue-providing exchanges that satisfy organizational and individual objectives” (as cited in Varadarajan & Menon, 1988, p. 60). CRM positively influences consumers’ attitudes and purchase behavior (Olsen, Pracejus, Brown, 2003; Pracejus & Olsen, 2004; Henderson & Arora, 2010), and has become a strategic tool for increasing firm value and improving financial performance in the long term (Dean, 2004). As a result, investment in CRM in the U.S. is rapidly increasing, with annual average growth of more than 12%. In Korea, CRM came into the spotlight after the mid-1990s. In China, a successful implementation by Nongfu Spring in 2006 attracted more interest and more investment in CRM.
As firms worldwide increasingly employ CRM, researchers have become more interested in CRM as well. Most studies focused on finding factors that affect the effectiveness of CRM. However, most studies were conducted in the West, so the strategies or guidelines they offer are not directly applicable in other cultural contexts. A successful implementation of any marketing tool, including CRM, requires understanding its cultural context. Understanding culture is essential for effective marketing, for entering and growing in foreign markets (Steenkamp, 2001; Mueller, 2004).
In this paper, we study the effect of CRM, taking into account cultural factors. We focus on Korea and China. We chose these two countries because they are both part of the larger Asian market, yet have different cultural characteristics. Our study thus extends prior research that was mainly conducted in the West.
We examined Chinese consumer responses to CRM. CRM is not a common concept in China, but Chinese consumers demand that both national and foreign companies offer socially responsible products and services. Despite the recent slowdown, China is still a market with a big potential, attractive to multinational corporations. Hence, our study carries practical significance. This comparative study may be especially useful to Korean firms, as they show the highest rate of entering the Chinese market.
We tackle several issues in this paper. First, we examined the responses of both Korean and Chinese consumers to CRM from a comparative perspective. Second, we analyzed the moderating effect of product type on consumer response to CRM. Product type has been treated—with contradictory results—as an important variable in previous research (Strahilevits & Myers, 1998; Burnett & Lunsford, 1994; Winterich & Barone, 2011). Our study provides more insight into those results, and suggests what the practical implications are for firms in the Korean and/or the Chinese market. Third, we explored the response of Chinese consumers to CRM by regional groups. The Chinese economic reform of the early 1990s allowed for many different lifestyles to emerge in China (Wei, 1997). There are regional differences also in economic, social, and cultural aspects, consumer characteristics, or consumer behavior (Schmitt, 1997; Cui & Liu, 2000; Sun & Wu, 2004). Rather than treating China as one single market, segmenting markets becomes a prerequisite for effective marketing in China. Building on results and insights from previous research and taking account of differential consumer responses, we found that there are regional differences in how Chinese consumers react to CRM. 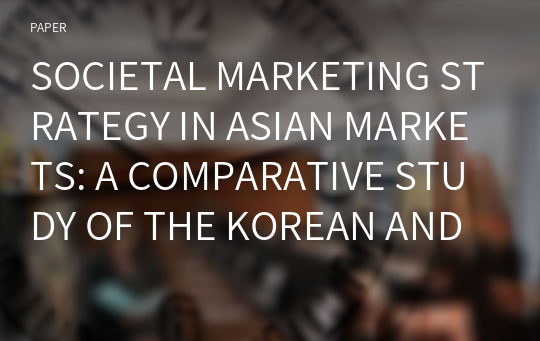