This paper looked into the use aspect of vocabulary and sentence expression shown in Hangeul letters owned by Japanese Sokebungo. As a result of extracting the meanings through the checking of them against letters along with the original in Japanese, this paper discovered unusual words in what is called ``Letters of an Interpreter``, which are rarely found in other literature of the same age. It was found that Korean mixed with Chinese was used in their writings, and more than 50% Sino-Korean words were used in most of the letters, or memoranda; in addition, a stereotyped style of Chinese-style sentences and Chinese letters was also used. As the characteristic of their form, shown is``Dang_sin``, which is a reflexive pronoun of the third person title of honor, and ``-ge hayeo(s)-`` shows the pre-phase of moving to the pre-final ending``-ges-.`` This paper also found that ``-Chajiha-``,``Basja and ``-eul``, which are Idu frequently shown in ancient documents, were used. As for the characteristic of words, there are the case of using Japanese words as they were, and the case where Japanese words were borrowed; also, quantifiers are diversely shown. Hangeul letters possessed by Sokebunko of Tsushima have an important value as the data complementing the spoken language materials, which cannot extracted from bibliographic data in modern times, of the Korean language. 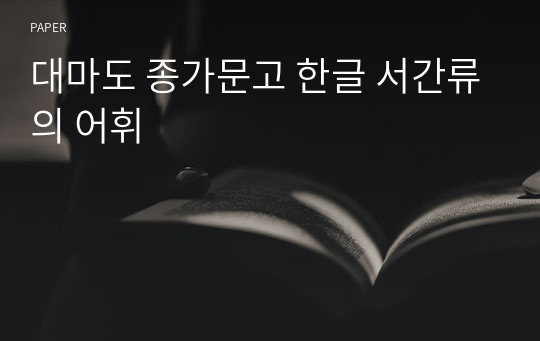