This study reviewed writing system and phonological characteristics from 18th century to 19th century`s Hangeul Correspondences written by Early Joseon Dynasty and Japanese interpreters, and discussed the aspects and features of use in this data. First of all, as the result of reviewing the format and contents of this data, it is considered as executive documents written by interpreters when doing their duties. In Joseon period, official documents were written in Classical Chinese or Idu sentences. This data, however, was mainly written in Korean along with Classical Chinese. This Korean-Classical Chinese style frequently shows two-syllable auto-segmental letters and Chinese transcription of each Sino-Korean words. It is assumed that Sino-Korean words are still written in Idu sentences, and the rest of them, such as native Korean words, particles, endings, frequent Sino-Korean words are converted to Idu sentences in executive document. In this data, derivational surface forms are transcribed after applying phonological rules. In case of non-automatic allomorph alternatives, which are inderivational surface forms through phonological rules, are written in surface forms. And there are two exceptions, one is particles of Idu ending phrases, the other is writing of grammatical morphemes (tense) such as -ass-, -ess-, -keyss- those were in the formation process. The Central dialect is speculated as the code reflected in this data, through the tokens of t-palatalization, k-palatalization, n-deletion, and umlaut etc.. After morphological patterns of words and diverse phonological phenomena are examined, this data shows some salient features of central dialect overall, but in partial vowel use, such as ``^>a`` change, and ``□u`` vowel rounding of Kyeongsang zone dialect, where the area the interpreters used to work in the field. 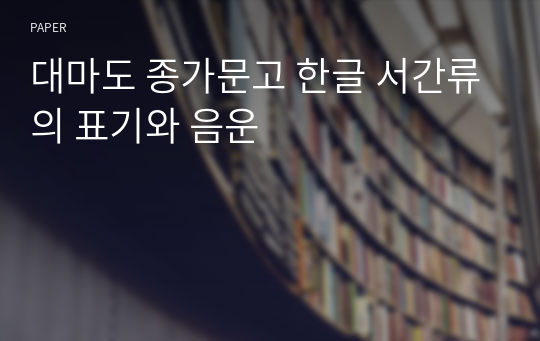