Although the alternation of different from, different than, and different to has been among the most talked-about linguistic variations in English, few previous studies have provided a thorough empirical analysis of the alternation, thereby letting the issue remain mostly a matter of which choice is correct or more appropriate. This study discusses the use of the three English prepositions occurring after different on the basis of the relevant data from seven English corpora. The results indicate that the use of the three prepositions with different varies with genre, regional differences, and grammatical contexts. Thus, the traditionally less preferred than and to, which are known to be quite common in American and British English, respectively, are most frequently used in speech but least common in academic prose. The use of different than, in particular, is approaching the level of the dominant different from in colloquial American English and shows clear signs of increasing use, suggesting the possibility of eventually threatening the dominant status of the standard form in other genres. Grammatically, than tends to be more readily used when there is an intervening element between different and the preposition. Further study is needed to better understand the use of the three alternative prepositions, especially the roles that other intra- and extra-linguistic factors play in their alternation. 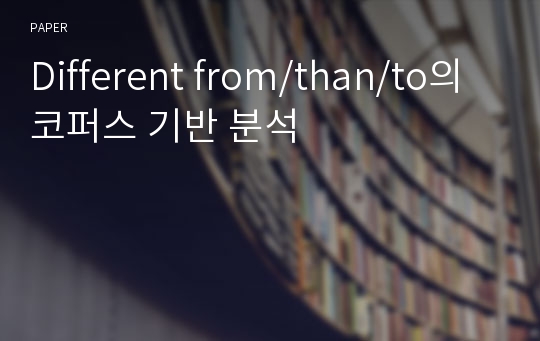