With the institution of the 6th Curriculum for Education, 18 kinds of Literature textbooks, categorized as second division authorized textbooks, have been published in addition to the first division high school Korean textbooks, which also include literature in their contents. This paper first looks at Korean and Literature texts for high school students containing Kim, Yoo-jung`s 「Dongbackggot」 to discover how well the exercises in these textbooks conform with the Literature Education Curriculum within the 6th Curricurum for Education, and what their problems may be. The time allotted for study was found to be appropriate at around 3 hours. However, in the case of certain textbooks, an incongruity between the middle unit and the small unit in the development of the lession was noted. A problem concerning the text itslf was the imperative need for a faithful and accurate adherence to the original text. Also, all the exercises were inconsistent to some degree or other in respect to the simultaneous achievment of the objectives for literary education (articles a, b, c). This paper examines from a trial perspective the possibilities of how 「Dongbackggot」 might be presented to the students in a literature classroom. The approach to the text proceeds from reading to interpretation and criticism. In reading, the questions considered for analysis include, `Whose story is it?`, `What kind of story in what kind of world is it?`, and `What kind of language is the story told in?`. Interpretation and criticism concentrates on finding the meaning of parts of the text that felt incomplete during the initial reading. In addition, inter-text of 「Dongbackggot」 are compared and contrasted. Lastly, the text of 「Dongbackgott」 is examined to demonstrate that its descriptive character employs such rhetoric devices as symmetry and gradation. 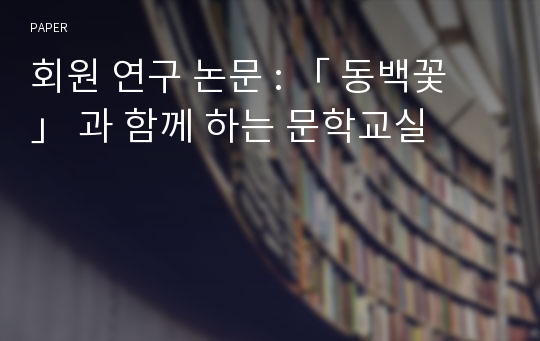