Judgment of Perceived Exertion by Facial Expression: Do Gender Difference?

The aims of this study were (1) to exam the correlation between rating of perceived exertion (RPE) estimated by the observer and RPE estimated by the subject; (2) to investigate the gender difference in perception of exertional facial expressions. To accomplish the stated objectives, an experiment was conducted in which 20 subjects simulated an incremental workload exercise that varied with respect to the exertion demand. This session was videotaped and analyzed by a group of external observers. 20 observers were recruited including 10 male and 10 female. Each observer observed the exertional faces taken from subjects during different exercise intensity and estimated their RPE. The results showed that the observer estimated RPE was significantly correlated with subject self-rated RPE. The observers were able to apply facial expression of effort to estimate the level of exertional perception. There was no gender difference between observers to estimate subject`s RPE. However, the subject`s sex influences the observer`s visual estimate of exertional perception. 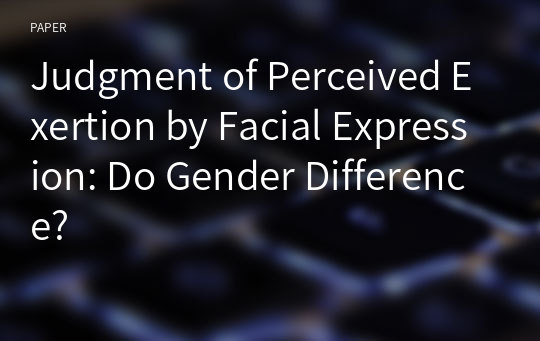