This dissertation is to analyze dualistic conflicts reflected In the dramatic structure of Shakespeare`s Othello. According to Aristotles` Poetics, "Tragedy is an imitation of action in the form of action, not of narrative ; through pity and fear effecting the proper purgation of these emotions." In Hegel`s ``theory of Tragedy``, the reason why the tragic conflict thus appears to the spirit is that it is itself a conflict of the spirit. It is a conflict between powers that rule the world of man`s will and action. Tragedy shows them in collision. Their nature is divine. The end of the tragic conflict is the denial of both the exclusive claims; it is the act of the ethical substance itself. The passion of Othello is not only personal; it is egoistic and anarchic, and leads to crime done with a full knowledge of their wickedness; but to the modem mind the greatness of the personality justifies its appearance in the position of hero; Accordingly such beings as Iago and almost portents of evil are not indeed made the heroes of tragedies. From this point of view I wish to discuss here: some domination, dualistic conflicts reflected in the dramatic structure of Othello. The Tragedy of Othello begins with a public proclamation of marriage in Act I. It seems to me that it is as if the play was a black comedy of sex and adultery. And that here Iago conspires to. make a public spectacle of sex, and to make it comic. From the heroic perspective, this drama is a. tragic romance, which means a violation of a romantic fantasy. As Desdemona remains a virgin, and as Othello is capable of regarding his desires as chaste, Iago can not but remain powerless. In this tragedy the substitution of a false conflict for a real conflict is the key-resolution to the dramatic structure of Othello. It seems to me that vicious Iago systematically conspires Othello by talking about Cassio`s irnaginal experience with Desdemona and in the long run, Othello can not help regarding his own sexual experience as adultery. 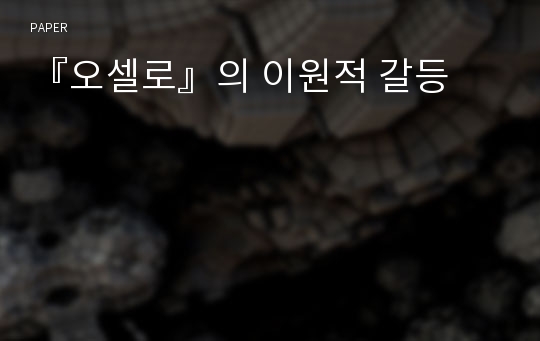