The most common clinical manifestation of herpes zoster is a unilateral vesicular eruption with a dermatomal distribution. Only about 5% of patients with herpes zoster have an associated somatic or visceral motor neuropathy. Among them, colonic pseudo-obstruction (Ogilvie syndrome) as a complication of herpes zoster is extremely rare. Although several such cases have been described in the literature, there have been only 2 reported cases in Korea. Herein, we report an interesting case of Ogilvie syndrome associated with herpes zoster. A 68-year-old Korean woman was admitted with a 1-week history of abdominal pain, distention, and constipation. She has no skin lesion at all. Her abdomen was diffusely distended and the bowel sounds were hypoactive. She had no significant medical or surgical history. An abdominal X-ray showed colonic dilatation with no obstructive cause. Computed tomography and sigmoidoscopy did not show any obstructing lesion. Her abdominal symptoms were worsening gradually. Six days later, multiple grouped vesicles with erythematous swollen patch was seen on her right abdominal wall and back. A diagnosis of Ogilvie syndrome associated with herpes zoster was made. She was managed with oral analgesic and intravenous acyclovir. She was recovered and there was no sequela. 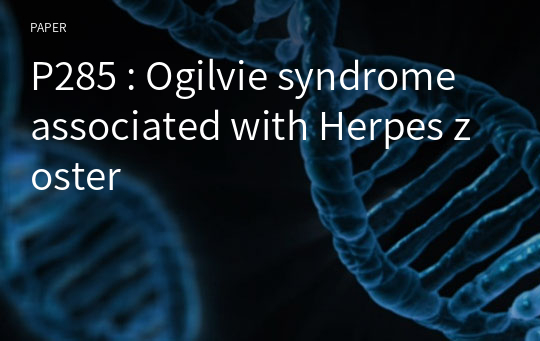