In this article, I explore the aspects of the “modern” woman with regard to the impending imminence of the pre-Civil Rights movements. C. S. Lewis’s and Flannery O’Connor’s treatments of women center upon their concepts of evil, upon women’s biology and pregnancies, and upon education for women. Underneath the literary and cultural contexts of the stories, the victimization of women has not received full attention. The reader can infer the underlying ideology of male domination over women. Lewis’s portrayal of female spirituality incurred charges that he relies on using inferior stereotypes of women. Lewis and O’Connor both tend to baffle female readers in terms of their conventional echoes against female liberation. In Lewis’s That Hideous Strength, women are generally described as vulnerable to evil and further positioned as ‘almost’ children in terms of women’s perceived lower spiritual status. In his works, Lewis adopted gender essentialism based on Christian doctrines. However, in his real life, Lewis supported female education, and his later life showed his gradual acceptance of dynamic female roles in society. Thereby, Lewis’s views of modern woman tend to be ambivalently portrayed in his writing. Similarly, O’Connor has baffled many feminist critics in terms of her ludicrous female characters in fictions such as “Good Country People” and “A Stroke of Good Fortune” because she portrays women as spiritually and intellectually ugly regardless of their education. My approach unveils Lewis’s gradual development of accepting women as equal figures in his later works. In addition, recent criticism shows that O’Connor revised her original manuscripts because of her vulnerable position relative to Southern male readership due to her gender and religious faith. I suggest that, contrary to previous critical perceptions, Lewis and O’Connor question the barrenness of single intelligent women with regard to the issue of productivity in Christianity while they explore female education, professional roles, and the changing values of modern women. 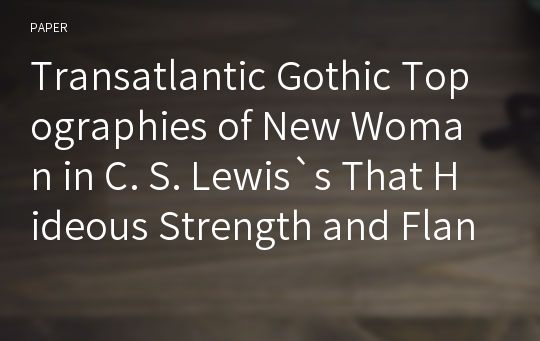