A characterization of computation and computational explanation is important in accounting for the explanatory power of many models in cognitive neuroscience. Piccinini (2015) describes computational models as both abstract and mechanistic. This approach stands in contrast to a usual way of understanding mechanism which implies that explanation is impoverished by abstraction. I argue that in order to provide a useful account of computational explanation in cognitive neuroscience, Piccinini.s proposal must be complemented by an abstraction criterion that fulfills two conditions: motivating abstractions enough to make a model computational and not motivating the omission of information that is constitutive of mechanistic explanation. These conditions are relevant because although there are computational and mechanistic descriptions of neural processes (Piccinini & Bahar 2013) mechanism must, as a normative theory, determine whether the abstractions that these models involve are well motivated. I argue that the abstraction criterion proposed by Levy and Bechtel (2013) is a promising candidate to fulfill these requirements. First, I show that this criterion can legitimize the omission from recently proposed neurocognitive models of all features that are non-computational according to Piccinini’s approach (although it also motivates some modifications of his characterization of neural computation). Second, I argue that this criterion legitimizes those models only if we interpret them as including all the information constitutive of mechanistic explanation. 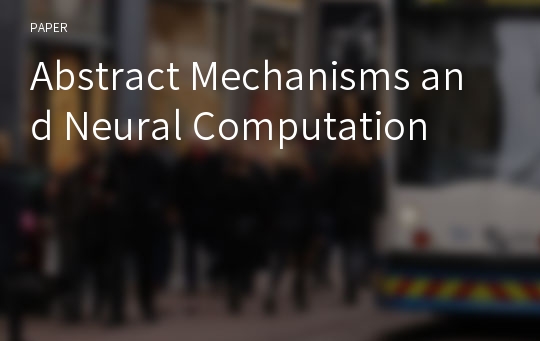