A Discourse Marker keymey in the Language of Jeju : Its pragmatically-controlled functions and use

Little research has been done on linguistic analysis on Jejueo in general and discourse approach to various Jejueo expressions in particular. This is because Jejueo has been treated, at best, as a dialect of Korean. However, it has been noticed that the language used in Jeju is “not mutually intelligible with Standard Korean”(Cho, et al 2001, Yang 2014 et al). As an independent language, Jejueo has its own linguistic features. With this in mind, the current study is to explore the pragmatic nature of keymey in Jejueo, the language of Jeju, from a discourse-functional point of view. As an interactional communicative tool, the discourse marker serves various discourse functions such as softener, agreement, attention-calling, etc. Furthermore, this study is to classify these functions into two properties: basic property and derived property. The former has something to do with ‘polite interaction’ and the latter includes various discourse functions. In this way, it is expected that the present study manages to provide, though descriptive, discourse-functional approaches to various oral features of Jejueo. 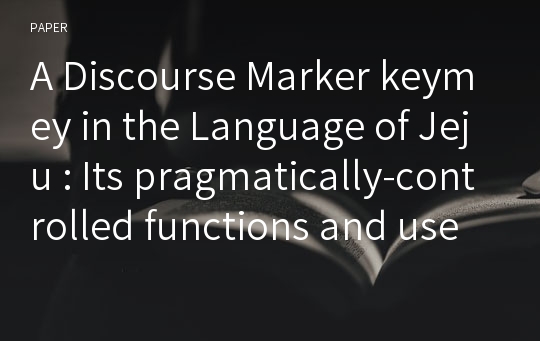