The technology of supplying the electric power by wireless power transfer (WPT) is expected for the next generation power feeding system since it can supply the power to portable devices without any connectors through large air gap. As such a technology based on strongly coupled electromagnetic resonators is possible to deliver the large power and recharge them seamlessly; it has been considered as a noble option to wireless power charging system in the various power applications. Recently, various HTS wires have now been manufactured for demonstrations of transmission cables, motors, MAGLEV, and other electrical power components. However, since the HTS magnets have a lower index n value intrinsically, they are required to be charged from external power system through leads or internal power system. The portable area is limited as well as the cryogen system is bulkier. Thus, we proposed a novel design of wireless power charging system for superconducting HTS magnet (WPC4SM) based on resonance coupling method. As the novel system makes possible a wireless power charging using copper resonance coupled coils, it enables to portable charging conveniently in the superconducting applications. This paper presented the conceptual design and operating characteristics of WPC4SM using different shapes' copper resonance coil. The proposed system consists of four components; RF generator of 370 kHz, copper resonance coupling coils, impedance matching (IM) subsystem and HTS magnet including rectifier system. 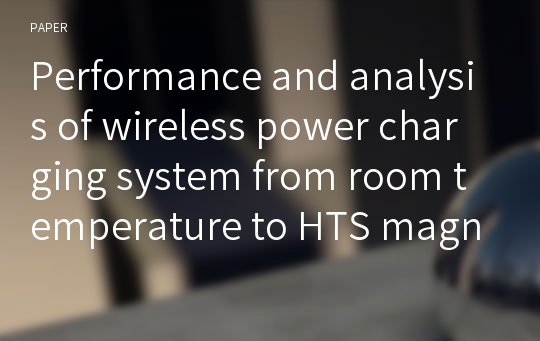