Japan acted as an important source of new painting style and as an important place for art education in the history of modern Korean art. Japanese painting style, which had already appeared in Korea in mid 1910s, intensified during the 1920s as a result of the establishment of the Chosun government-general art exhibition(朝鮮美術展覽會; Chosun misuljunramhye, abbreviated from Chosun misuljunramhye ), and was threatening and chronic enough to change the traditional Korean perception of art. Therefore, the problem of Japanese painting style was the object of much attention by researchers as an issue of modern Korean art history
Originally, new Japanese style paintings gave different impressions to Korean viewers compared to traditional ink paintings. 1920s was a great turning point in which Korean artists accommodated Japanese painting style into the their own, but it widened and deepened its influence to even include the popular culture from 1930s to 1945.
During 1930s to 1945, Japanese painting style was normally characterized by elaborate and detailed use of color, flat descriptions of the subject, technicalism. The Japanese painting style during this period had no clear distinctions between what is Japanese and what is Korean. The paintings which pursued Korean beauty were criticized like ‘Ukiyoe(浮世繪)’ or ‘the Japanese Southern School style(南畵風)’. The intentions of the artists and the evaluations of their works were often completely different from each other.
The exhibition of Japanese art that took place in Deoksu Palace(德壽宮) Seokjojeon (石造殿, which means the stone house) was opened from 1933 to 1945. This exhibition became a chance to see the paintings of preeminent modern Japanese painters and helped introduce Japanese painting style to the citizens of Korea.
Notable Korean painters who studied in Japan between 1930s to 1945 were: Kim Yongsoo(金龍洙), Kim Junghyun(金正炫), Lee Yutae(李惟台), Park Seangkwang(朴生光), Lee Ungno(李應魯), Jeong Jongyu(鄭鍾汝), Choi Kunbae(崔根培), Female artists include: Park Rehyun(朴崍賢), Chun Kyungja(千鏡子). These people studied in Teikoku Art School(帝國美術學校), Kawabata painting School(川端畵學校), Nihon Art School(日本美術學校), Joshibi Women’s Art School(女子美術專門學校), Kyoto City Specialist School of Painting(京都市立繪畵專門學校). Their activity played an important role in the acceptance and the spread of the Japanese painting style. Their experience of Japanese art education has an important meaning in that they settled the art education system in art universities after the Liberation of Korea in 1945. 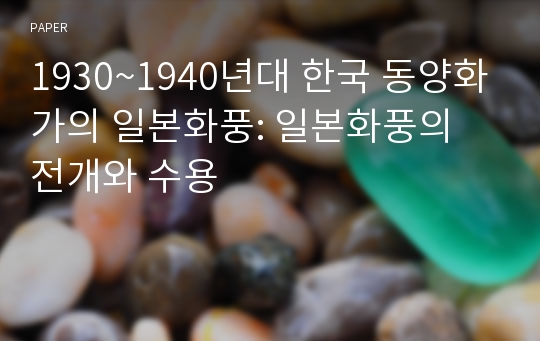