The title above refers to an essay I published in the Journal of Art Studies (Bijutsu Kenkyū, National Research Institute for Cultural Properties, Tokyo) in five parts from December, 1997, to December, 2006. That essay addressed the reception of Post-Impressionist painting in Japan.
My shorter article in this publication consists of two sections. In the first, I identify issues in the reception of Post-Impressionism, summarizing my broad examination of the question, focused on the year 1912, from the aspects of language and visual image. In the second section, I explain that it has been noted, both during the time the series was being published and since then, that the use of Kōki-Inshōha as the translation for “Post-Impressionism” is in error, since it in “Post” is translated as Kōki (literally, “later period”). The term has not been used in recent years. I examine that terminological change chronologically.

1. On “Kōki-Inshōha : Japanese Post-Impressionism Around 1912”
Here I first address the linguistic issues through the words of young artists who were key figures active around 1912. Kawaji Ryūkō (1888-1954), a poet as well as a student at Tokyo School of Fine Arts, Kinoshita Mokutarō (1885-1945), who was just beginning to engage in art criticism, the painter Yamawaki Shintoku (1886-1952), and Mushakōji Saneatsu (1885-1976), a member of the Shirakaba Group, which published the literary magazine Shirakaba (founded in 1910), engaged in what is known as the controversy over pictorial conventions (kaiga no yakusoku ronsō). The Mushanokōji position in this controversy was supported by, among others, Yanagi Muneyoshi (1889-1961), who wrote “Kakumei no Gaka ,” (Revolutionary Artists; Shirakaba , January, 1912), and Kimura Shohachi (1893-1958), a young artist who also actively published translations and introductory articles about art in magazines and other publications from 1912 on.
In considering the reception of such visual images, the reception of an alien culture, I turned to the agency of those doing the receiving. Based on the principle that “reception” could include the phenomena not only of imitation and influence but also amplification, rejection, and deviation, I examined various works. What became clear from that research was that in 1912, when an illustration reproducing a Van Gogh image of the sun, glowing vividly in bright colors, became available, it was directly copied. A painting of the Jintan illumination, an advertising display for a medication that gleamed in the night sky over Tokyo, was also created. The images exemplified by the “sun” and “Jintan” illustrate the diversity and complexity of the reception of the Post-Impressionists in Japan.

2. Kōki Inshōha as a term in art history: on the history of research
After “The Post-Impressionists” reached Japan in the form of visual images, that is, illustrations of their paintings, in late 1911, several Japanese translations of the term “Post Impressionists” were used. Of them, the term Kōki Inshōha (literally, “late Impressionists”) was most widely used, from about 1913 until the 1990s.
The art historian Kanbayashi Tsunemichi, however, pointed out in his Bigaku kotohajime: Geijutsugaku no Nihon kindai (The birth of aesthetics: The study of art in modern Japan; Tokyo: Keiso Shobo, 2002, page 132) that “Post-Impressionists” should properly be translated as Inshōha igo or Posuto Inshōha (both meaning “Post-Impressionist”). In addition, Miyazaki Katsumi noted that Kōki Inshōha is a mistranslation in his essay “Cézanne kara 20 seiki kaiga e: Shizen, naimen, kaiga” (From Cézanne to 20th century painting: Nature, the interior, painting) for the exhibition From Monet to Cézanne: Impressionists and Epoch (held at the Akita Museum of Modern Art and at the Museum of Modern Art, Saitama, September–November, 2002). Takashina Shūji subsequently reiterated the observation that Kōki Inshōha is a mistranslation, that it refers to the subsequent movement that attempted to depict interior states and it properly should be Posuto Inshōha , a conclusion reported in an Asahi Shimbun article that addressed the issue and reported on that exhibition (June 4, 2003). Since then, the term Kōki Inshōha has all but ceased to be used in books, catalogues, and other publications. At present, in Japan, the term Posuto Inshōha is extensively used with respect to modern Western art; in texts and exhibitions concerning modern art in Japan, the terms Posuto Inshōha , Ｋo Inshōha , and, in quotations of earlier texts, Kōki Inshōha are used. Thus, a shift in terminology is occurring. 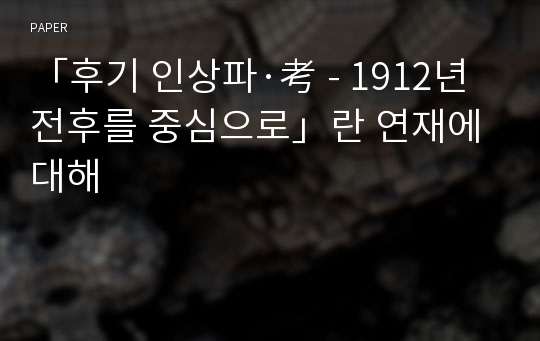