Despite few official records about the court painter Kim Hongdo(金弘道, 1745-1806), there has been much biographical research on the artist. Yet, there remain some parts of his lineage that require revision. This study presents the first comprehensive research on Kim Hongdo that reconstruct Kim’s life based on newly discovered historical texts, thereby bringing the artist to light as a literati-style court painter, a newly created type of artist during the Joseon period.
Kim Hongdo was born to a family of the military official class that used to be wealthy. He seems to have learned painting from the literati painters Kang Sehwang and Sim Sajeong in his teen years, and was recommended by the prominent artist Kim Hiseong to become a court painter at the Royal Bureau of Painting. Kim Hongdo was not a mere court painter performing to the duties of an artisan from a miscellaneous department of the court. Rather, he obtained prominence as a literati-style court painter for bringing the foremost literary theory to his concept of painting: that art’s creativeness is about being naturally inspired from heaven. Kim Hongdo incorporated his theory of art into the arts for cultivation: poetry, calligraphy, painting, and music. He also integrated the concept of delivering both the spirit and likeness of forms in his painting. With these talents Kim was able to become the special artist working solely for the king, and also gained an unparalleled reputation among scholar officials and those of the middle class who were the privileged leaders of art culture. However, owing to the fact that Kim Hongdo had to live as a low official for over ten years in his 30s, 40s and early 50s, his excessive desires for appreciating art as well as his drinking habits brought about poverty and sickness in his later years. Starved and sick at sixty-one years old, Kim Hongdo moved to where his former student and junior court painter Pak Yuseong was a local painter official in Jeolla province in 1805. Kim seems to have passed away one year later. 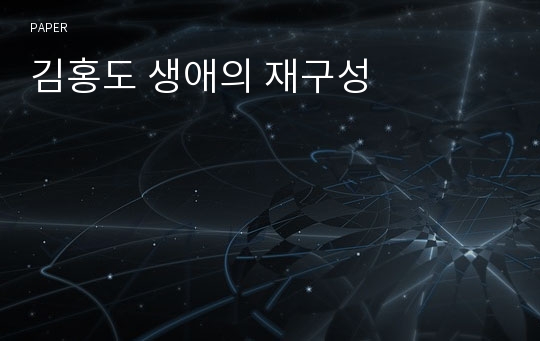