The Authentic Power of Debunking Literature: Focusing on Famine Poems

The ‘debunking literature’ can contribute to improving the society by revealing the social maladies, lightening the truth and exposing the evil to the world, whose genuine power lies in digging the truth even often running the risk of death. This paper aims to confirm why the poems describing the on-going famines in North Korea and the past ones in Ireland belong to debunking literature and what power or effect they have or they are expected to have. For this, I established some hypothesis through my reading on famines and examined the effects Irish literature on the Irish Great Famine has brought to the development of the Irish Society in advance. And through my investigation, I could confirm that North Korea’s refugee poet, Mr. Jang Jin Sung exposed extreme poverty and misery by contrasting the dying and innocent people with the cruel despotic regime sometimes in a strongly direct way and that the Irish famine poems of Mangan, Yeats and Heaney focused on the Great Britain's hypocritical and indifferent colonial policy on the Irish starvation-stricken people in a roundabout way. Moreover, reading famine poems of the two nations led me to compare North Korea’s famine poems with those of Ireland: they look similar in the respect that they portray the miserable scenes surrounding a mass of population who died of famines and spotlight political neglect as the main reason, but look very much different in the respect that, in a sharp contrast with any of Irish poets, North Korea’s refugee poet, Mr Jang Jin Sung, ran the risk of even his death to expose the despot regime that slaughtered, and is still slaughtering, its own people that has no liberty to escape from the starvation. My last conclusion is that the courageous poet, Jang’s pains will lead to the betterment of North Korea’s human rights just as Irish famine poems have influenced the development of Irish politics, history and culture deeply. 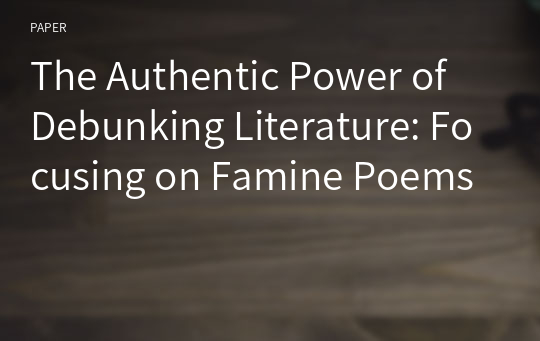