In this study, I will focus on “Byzantium” and explore how the poem mirrors the essence of Zen Meditation. Not only is the poem patterned after the progressive procedure of Zen meditation, but they also reflect the fundamental concerns of Zen meditation, such as the problem of duality, the concept of time, and an aspiration for freedom from the limitation of this life. These features of Zen meditation are expressed through the use of specific symbols, the implications of setting, and various poetic techniques. The purpose of this study is to provide another way to read the poem by analyzing it in the context of Zen meditation. The structures of the poem are loosely patterned after a typical process of meditation through which the meditator reaches Unity of Being. The process of Zen meditation is nicely depicted in the ten pictures titled “The Boy and the Ox,” each of which shows the gradual development of the meditator’s search for his won nature or Buddhahood. For the convenience of my discussion, I will simplify the ten stages of Zen meditation to four−confusion, immersion, union and return−which, I believe, cover all the important procedures in the meditation. The first stanza of “Byzantium” exhibits some typical features related to its meditative scheme, in which we can feel the sense of confusion on the part of the meditator or poetic persona. In other words, the meditator sets out his meditative journey to search for an answer for his sense of confusion or clear it. The second to the fourth stanzas are equivalent to the second stage (immersion) and the third stage (union or seeing the vision) of meditation. The last stanza parallels the final stage of Zen meditation (return). In “Byzantium,” we see the reflection of Zen meditation. The structural patterns of the meditative poems generally correspond to the four stages of Zen meditation: confusion, immersion, union or seeing the vision of the unity, and return. Yeats’ use of poetic techniques such as line scheme, use of number symbolism, and the arrangement of stanzas are closely associated with the meditative scheme of the poems. In addition, the major concern of the poems is reminiscent of that of Zen meditation in that they confront the problem of duality, which sets up the occasion for meditation. The agony of duality results from the concept of time. Thus, the meditator tries to reconcile the dichotomous elements, resulting in the state of freedom from time. More than anything else, the purpose of Yeats’ meditative poem lies in the poet’s aspiration for self-awakening, as in Zen meditation. The poem is Yeats’ record of his life-long efforts to meet his “fourth self” or Great Self. 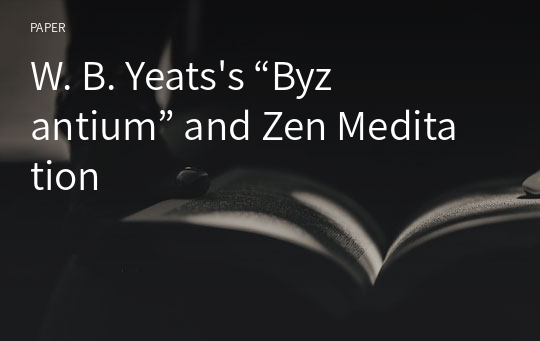