EVALUATION OF FABRIC DRAPE BASED ON RGB-D SENSOR SYSTEM

Drape is the ability of a fabric to hang in folds when suspended under its own weight as shown in the skirt folds (Sanad, Cassidy, Cheung, & Evans, 2013). Drape characteristics of a fabric is closely related to the physical and mechanical properties including bending rigidity, weight, and shear rigidity of the fabric. Fiber type, yarn structure, fabric weave structure, and finishing methods also affect the fabric drape.
Occasionally, fabric drape is subjectively evaluated by the staffs in the case of apparel sectors. Since the staff’s evaluation might involve some degree of inconsistencies, partly due to the personal preference, and fashion trend changes, or lack of reproducibility, many research reports have been published regarding the methods to measure the fabric drape characteristics objectively and accurately. A pioneering method regarding objective tests to measure fabric bending length, as a measure for fabric draping, was developed (Peirce, 1930). Research by Schwarz (1939) showed technical evaluation method for fabrics treated with finishing agents. Chu, Cummings, and Teixeira (1950) developed a drape meter to study the factors affecting the fabric drape, based on an optical system to cast the image of round fabric specimen on the ground glass.

Generally accepted test methods have enabled researchers determine the fabric drape with improved reproducibility to mostly acceptable degrees (Cusick, 1968). However, the three dimensional shape of the folded structure often deforms with time or with subtle vibration around the fabric specimen during the drape measurement. Due to the uneven and complex nature of fabrics, the overall shape of the fabric specimen on the drape tester often becomes unstable.

Since the fabric drape coefficient is more or less unstable due to the structural or physical factors of fabric specimens, such as bending and shear hysteresis, it is also important to consider the instabilities during the drape measurement procedure. Niwa and Morooka (1976) reported mechanical values contributing to the stability of the drape coefficient, and found that the larger the hysteresis per unit weight in bending deformation of fabric is, the larger the instability of the drape coefficient becomes for the fabric specimens used for men’s suit in the study.

There is a need to understand the fundamental mechanisms of how draping may generate pleasing forms. Mizutani, Amano, and Sakaguchi (2005) devised a new apparatus for measuring the changes during the whole process of drape formation, using a type of drape elevator. They considered the generation of nodes and the developing process in relation to the mechanical properties of the fabric specimens. Mah and Song (2010) investigated fabric drape employing three-dimensional body scanning system. Laser scanners, in the system, project a horizontal line of light on the object, moving vertically along the length of the draped specimen. The scanned image can be rotated, resized and sliced.

Recently three-dimensional scanning systems saw notable developments in the hardware and computing power. Henry, Krainin, Herbst, Ren, and Fox (2010) relied on depth sensor cameras for dense 3D modeling of indoor environments. RGB-D cameras rely on either structured light patterns combined with stereo sensing, or time-of-flight laser sensing, allowing relatively fast image acquisition, which capture RGB images along with per-pixel depth information. Commercially available RGB-D camera, such as one of the Prime Sense products based on light coding technology of pseudo-random infrared patterns, allows for the frame acquisition rate of 5 to 20 per second, depending on the configuration of the supporting computer system. The acquisition rate seems to be reasonable for the static fabric drape measurement. Therefore, the RGB-D sensor enables relatively rapid acquisition of the three dimensional information of the fabric drape.

In this study, an RGB-D sensor was employed for three-dimensional scanning of fabric drape with drape elevator method proposed by Mizutani et al. (2005), and the drape measurement data were compared with the conventional drape test. Fabric specimens including cotton, linen, silk, wool, polyester, and rayon were investigated for the fabric drape and other physical/mechanical parameters. The results from the study suggest that the drape measurement method using the RGB-D sensor allows relatively rapid acquisition of three-dimensional drape information during the formation of fabric drape in the course of measurement process. It is suggested, however, that further in-depth study would be necessary due to the instability of the depth measurement around the sharp edges of the fabric folds. Future application of improved RGB-D sensor system in terms of the depth sensitivity is also suggested for the comparative study of the drape properties of fabrics employing both the RGB-D system and the conventional drape tester. 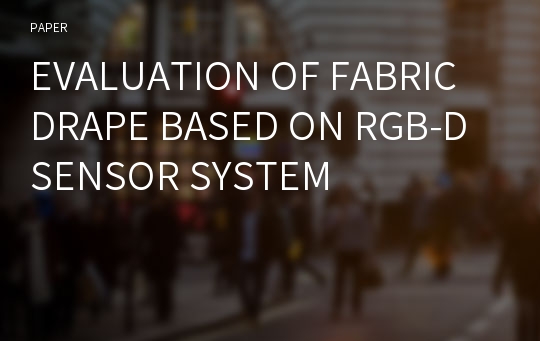