Sexed semen is commonly used for the production of calves of the desired gender. Gender selection is important in animal production industries. For example, female cattle are required for the dairy industry while males are preferred in the beef cattle industry. The present study was to assess the in vivo embryo production efficiency using the semen separated according to sex during superovulation in Hanwoo. Seventy Hanwoo donor cows were flushed on day 7 of estrus cycle with same FSH and artificial insemination by the same technicians. Embryos were recovered on 7 days after the third insemination by flushing the uterus with embryo collection medium. KPN semen straws used artificial insemination contained 20 million sperm (total number 60 million per donor). Sex-sorted semen straws contained 4 million sperm (total number 12 million per donor). The results obtained were as follows: No differences were observed in the efficiency of superovulation rates on KPN semen 87%, and sexed semen 100%, respectively. The mean numbers of total embryos are each 12.58±8.31 and 13.25±7.86. The mean numbers of transferable embryos, sexed semen were significantly lower than KPN semen (3.75±1.98 vs. 8.23±6.07, P＜0.05). The rates of unfertilized embryos from superovulation using sexed semen were significantly higher than KPN semen (50% vs. 15%, P＜0.05). The rate of degenerated 2-cell embryos from sexed and KPN semen was 60.87% and 11.11%, respectively (p＜0.05). In conclusion, these results indicate that superovulation using sexed semen was useful, but efficient embryo production was important to reducing the damage caused by the Flowcytometer-based sperm sorting procedure. 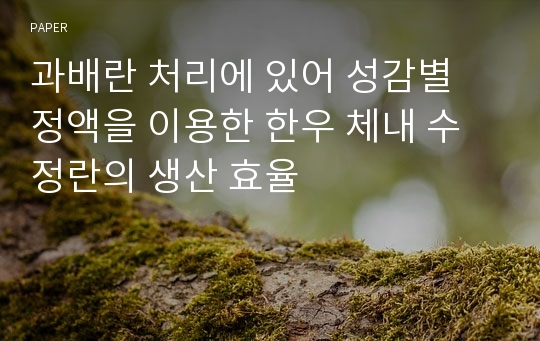