is paper tries to identify the deep meaning beneath the seemingly chaotic opposites the surface structure of the poem seems to insinuate. The fact is that The Waste Land is not so much a post-modern poem as a pre-modern one, provided we acknowledge that pre-modernity has trust as its hermeneutical principle. The Waste Land can be compared with Hopkins’ “God’s Grandeur”, which uses resurrection epistemology, as opposed to the extinct immanent epistemology, to demonstrate to the intellects the providence of God revealed in their lives and their environment. Like the resurrection epistemology of the 19th century, Eliot’s poem demonstrates the existence and working of God among themselves, in spite of the negativity of death and unreality prevalent in the modern world. Broadly speaking, modern scholarships of T. S. Eliot have been made with special reference to post-modern poetry, since there appear a lot of opposites in his poem. Appended for the explanation of the poem, “Notes” to The Waste Land use the languages of philology and impressionism in an exclusively confusing way, twisting the reading of the text into a worse confusion, with the result that it does not shed any light on the explanation of the poem. Chapman’s theory of doubleness the poet frequently resorts to in the making of his poetic works, points to the specific perspective beyond the ambiguity and chaos prevailing in the poem. Special reading strategy is in dire need for the right understanding of the text. Every reader approaching his text must retain the hermeneutics of trust, which is the “leap of faith.” With the hermeneutics of trust, every reader can penetrate into “the third” in the text, which can be identified as Jesus Christ whom the disciples met on the way to Emmaus. Without proper reader’s response, the reading practice itself would be futile and unreal, because the subjects it tackles are concerned aboutthe great proposition, salvation. 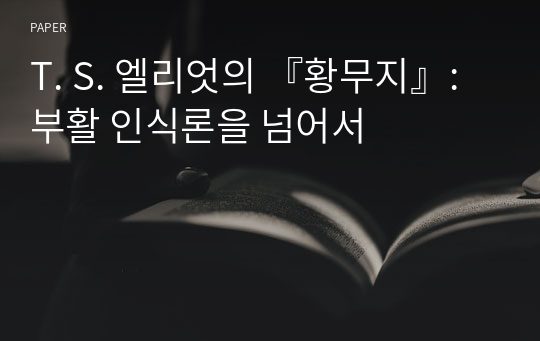