Acceptance of Hybridity and the Expansion of Identity: Focusing on Seamus Heaney and William Butler Yeats

I insist in this paper that hybridity and identity are two aspects of modernity, not the separate words like in the aesthetic theory of 'discordia concors' and that modernity carries both in it, expanding relative values. A new version of culture will be able to come out, depending upon how to arrange hybridity and identity.
The modern Irish culture, especially in its literature, offers a good example. As for the Irish people, the disaster of Great Famine brought an awakening that the Irish was not the British. And the Irish Literary Revival made the will to differentiate.
However, even after the Irish Literary Revival, the Irish people found out that their own culture had been hybridized and that the cultural conflict existed. However, the Irish writers have tried to recreate their own culture based on the pride of their own culture-a firm religious, political and cultural tradition.
W.B. Yeats's contribution lies in his attachment to things Irish. His spirit and taste for the supernatural world can be identified with Irishness. However, for Yeats the expression of identity cannot but be limited because he himself was hybrid in blood. Meanwhile, for Heaney, the expression of his own identity is seen in his concern about landscape, history and Gaelic language. His will to search for identity starts from the sense of dispossession, experiencing the Ulster Trouble. However he comes to recognize that they are hybridized. Despite this, his studious will to recreate identity has continued by accepting the hybridity.
In brief, Yeats and Heaney are the poets who, moving beyond hybridity, wanted to make the new cultural identity or to complete 'discordia concors' in culture. My last conclusion is that Yeats and Heaney seek to expand the cultural identity by accepting the hybridity and heterogeneity of their culture, and that, however, their last convergence is to search for the essence of the Irish spirit- light, freedom and song. 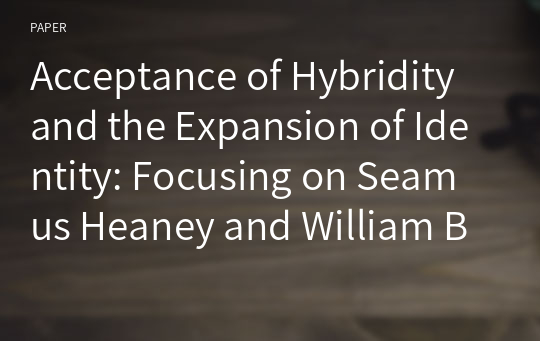