“All noble things are the result of warfare; great nations and classes, of warfare in the visible world, great poetry and philosophy, of invisible warfare, the division of mind within itself" said Yeats. Warfares between thesis and antithesis, whether visible or invisible, lie at the heart of Yeats's poetic world, enabling the poet to create the enormously powerful poetic text. In “Meditations in Time of Civil War”, both visible and invisible warfares are overlapped each other, intensifying the division of the poet's own mind, revealing the bitter agony of the poetic self to criticize and remake itself. This poem dramatizes a story of the poet's self-criticism and self-recreation through the warfare between History, the Irish Civil War, and the poet's dream as a cultural nationalist to re-establish and preserve the Irish identity. In “Ancestral Houses”, the poet dreams to redeem the eighteenth-century Anglo-Irish aristocratic ideals for making the unitary Irish mind, only to realize its impossibility. In “My House" through “My Descendants”, the poet seeks to re-establish the Irish identity in his own sanctuary, Thoor Ballylee, through the poetic task to break “the symbolic rose" into flower, only to fail in it, for he has excluded and suppressed History, the Irish Civil War, from his mind. The poet's dream is broken up. In “The Road at My Door" and “The Stare's Nest by My Window", the poet encounters the Civil War face to face, struggling to transform its violence and bitterness into ‘sweetness' and pursuing his dream once more, but it's far from being realized. In “I see Phantoms of Hatred and of the Heart's Fullness and of the Coming Emptiness", the poet internalizes the violent and bitter Irish historical realities through his vigorous imagination, severely criticizing himself as a solitary Platonist and remaking his poetic self a more solid one. In “The Tower", written next to this poem, we can meet the enormous power of his recreated poetic self. 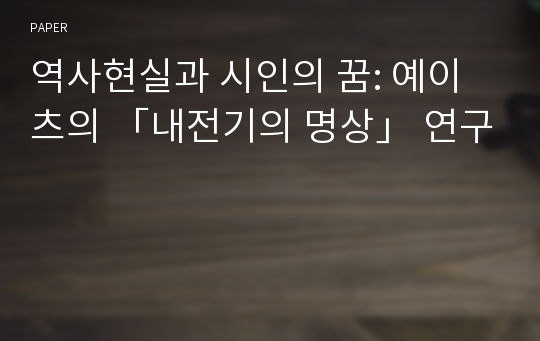