The focus of study in this paper is put on the comparison of symbolism manifested in the world of W. B. Yeats’ poetry and the thoughts of Master Won-hyo.. The comparing works include the identification of their understanding ways of life. The symbols in common to bridge W. B. Yeats and Master Won-hyo are, for instance, circle, cone, cycle, sphere, spiral, wheel, vehicle, etc. Such a sign symbolizes a round thing, in another expression, the world or the cosmos where man belongs to. The phenomenological world or the cosmos by oriental thoughts is represented as the 28 phases of the moon, ranging from the dark moon(objectivity) to the full moon(subjectivity), which according to W. B. Yeats’ theory are identified the same kinds of character of man. Won-hyo(元曉, 617～686), a life-long friend of another Buddhist Master Ui-sang., insisted on the necessity for every living being to return to the foundation of the One Mind(一心), which is the original state of being, in another words, or “Ultimate Reality” to which every living being has to return. The Hwa-yen Sutra(華嚴經), a rare scripture of Mahayana Buddhism(大乘佛敎), emphasizes that the Ultimate Reality is the Source of One Mind of Won-hyo. We can say that Mahayana Buddhism teaches every living being the way to return to the world of the Ultimate Reality by great vehicle of "Mahayana"(大乘) in sanskrit. Another principle of Hwa-yen philosophy may be expressed as "All in one, one in all. One is all, all is one"(一中一切一切中一, 一卽一切一切卽一). "The Six Aspects"(六相) is interpretated by the principle. The mutual relationships are harmonized between the whole and a part, between the unity of the whole and the diversity of the part, and between the completion of the whole and the self-denial of the part. The One Mind is synonymous with the Great Vehicle with great wheels, which return to the Source of One Mind, the original state of being, or the Ultimate Reality( or Nirvana). The meaning of the One Mind may be expanded to the synonym of the existential world or the cosmos, at the center of which the One Mind lies. Accordingly, The One Mind, the Great Vehicle or Great Wheel and the World has a similar analogy, which make a system of symbolism, so called “Yeatsian gyre theory.” Yeats imagined a spiral, which he preferred to call a gyre) or whirling cone. Then two such cones were drawn and considered to pass like the human soul through a cycle from subjectivity to objectivity. These cones were imagined as interpenetrating, whirling around inside one another, one subjective, the other objective. The cones were not restricted to symbolizing objectivity and subjectivity. They were beauty and truth, value and fact, particular and universal, quality and quantity, abstract and concrete, and the living and the dead. Yeats thought that he had discovered in the figure of interpenetrating gyres the archetypal pattern which is mirrored and remirrored by all life, by all movements of civilization or mind or nature. Man or movement is conceived of as moving from left to right and then from right to left. No sooner is the fullest expansion of the objective cone reached than the counter-movement towards the fullest expansion of the subjective cone begins. These movements slide to the 28 phases of the moon. The dark moon, in the course of wane and wax sways to the full moon. The different 28 patterns of the moon is mirrored by all life or mind, ranging from the highest state of subjective mind(the 15th phase: the full moon) to the highest cast of objective mind(the 1st phase; the dark moon). In the long run, the world which Won-hyo and Yeats seek for as an ideal space of mind is a unified one, into which melted are the binominal opposites such as objectivity and subjectivity, the sacred and the profane, the bishop and Jane, fair and foul, the dancer and the dance, beauty and truth, value and fact, particular and universal, quality and quantity, abstract and concrete, and the living and the dead. 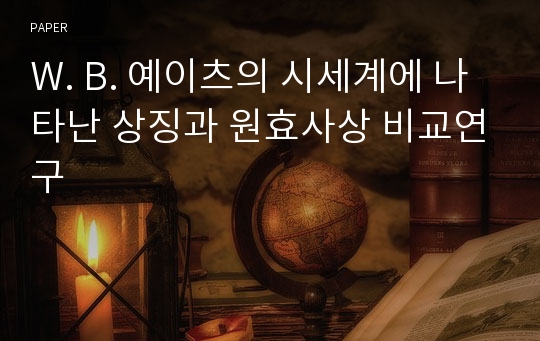