The purpose of this thesis is to explore W. B. Yeats’ poetic representation from the perspective of an approach which has arrested critical attention in recent development of contemporary critical theories. In most of its previous readings, Yeats has been generally considered as a romantist, occultist, and even modernist. However, this paper regards Yeats as a decolonialist living in a colonial society, and attempts to locate Yeats’s position in the context of decolonialists view including Frantz Fanon, Edward Said, and Gayatri Spivak. Decolonialism as a literary theory is becoming an influential textual strategy rather than remaining as one of the academic master discourses. So far, the established textual reading theories have been closely related to logocentrism, and they failed to be acknowledged as an objective way of reading. For this reason, the decolonialism has an important implication in the sense that it subverts the colonial ideology within the context of colonized society, and at the same time, reconstructs counter-discourse to find out self-identity and decolonized space. Yeats lived in Ireland from birth to death. During his lifetime, Ireland was under the colonial rule by England. At that time, under the influence of the Irish armed struggle in 1916, Yeats had eye-witnessed historical moments of the death of his mother land, Ireland as well as of the Irish people, as the history of Ireland manifests. In doing so, the Irish people broke the cycle of imperial situation. The consciousness of them became consciousness of the nation. The nationalists claimed the independence of their Ireland. By way of this historical experience of authentic decolonialization, Yeats’s aesthetics became, more and more, politicized against the crisis which the repressive force of imperialism caused. In this traumatic disasters of Ireland, Yeats’s poetic quest makes him struggle against the colonial power in a poetic way. In this regard, this thesis analyses Yeats’s text from the perspective of decolnialism. To begin with, focusing on the decolonization expressed by Yeats’s text, I tries to examine the process of his poetical writings and his attitude against colonialism. To this do, my major interest is in his myth and language employed in his poetry. And I attempt to search for the true Irishness in which Yeats makes every effort to materialize the reality of Ireland in his poetry. To sum up, the decolonial discourse and its textual strategy have important implications that lay bare the dominant ideology hidden in the seemingly impersonal intention of imperiali’sm. 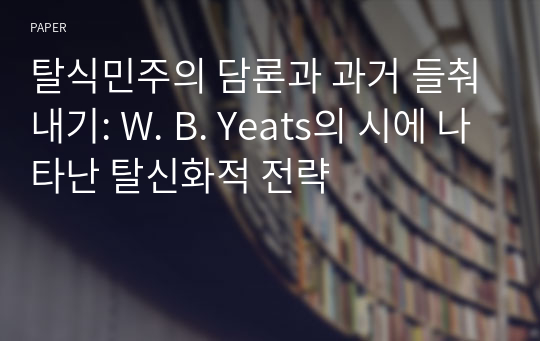