This study explores ideologies of English that came into play when two different schools, Yugyŏng kongwŏn and Paichai School, were established in Korea in the late 19th century, a period in which a modern kind of English education was initially demanded and formed in the history of modern Korea. Drawing upon language ideology from linguistic anthropology as a theoretical framework, this study analyzes primary and secondary sources of relevant historical documents. This paper argues that the discursive condition that led to the necessity of English education in late 19th Korea was concerned with Munmyong kaehwa, a discourse that the cultural elite called the Kaehwa party introduced and supported to create a modern type of nationalism in Korea. Perceiving English as a language for civilization and enlightenment, this elite group contributed to building the two schools. On the other hand, common Koreans tried to enter these schools simply to learn English, believing that English would serve their individual success. This narrative shows that although the two ideologies of English, that is English for civilization and English for success, were coexisting in the late 19th century, the social discourse of Munmyong Kaehwa was not fully indexed with the ideologies of English. 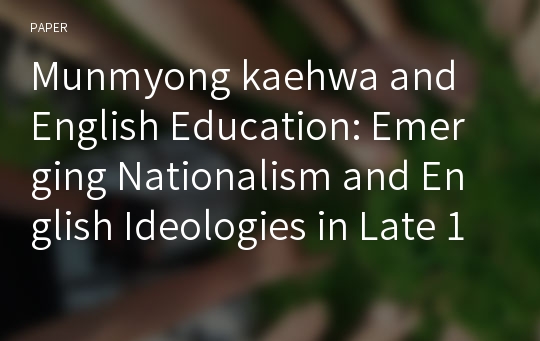