This paper is intended to study what kinds of the vegetables are mentioned in the Bible and how they were used in those days. While one hundred and twenty-eight different plants are mentioned in the Bible, there are today 2,384 plant species in modem Israel, most of which have been introduced in recent centuries. These plants obviously did not exist there in biblical times and were only recently introduced from Australia and South America, respectively. This article will study only the vegetables mentioned in the Bible and known to have existed in the old and new testament times. Since the first book devoted exclusively to biblical botany was that of Levinus Lemmens in 1566, the modem systematic study of biblical plants, began with F. Hasselquist, a student of Linnaeus, the founder of modem botany. In 1928, Immanuel Loew approached the subject differently, reviewing all known data pertaining to biblical plants. His work not only discussed biblical plants, but also plants in later Jewish literature, particularly the Talmud. The British scholar G. E. Post provided a broad field study of modem plants in Palestine, Syria, Lebanon, and Jordan. More recent major treatments of the subject include those of A. and H. Moldenke (1952), M. Zohary (1982), N. Hareuveni (1984), and Y. J. Choi(1996). Today, articles on specific biblical plants listed in the Bible can be found in any number of encyclopedias. This study attempts to provide a synthesis of the work of a number of scholars who studied the vegetables and plants mentioned in the Bible. As a preliminary study on the culture of food in the biblical period, this study has focused on the identity and features of the vegetables of the Bible. In only a limited number of instances, because of the paucity of the informations and the broad and generic descriptions of the plants, we can't be certain about the identification of the vegetables named in the Bible. In many instances the traditions established by the Greek, Aramaic, and English translations are helpful, although sometimes they are misleading. This paper subdivides the vegetables into broad areas, the general vegetables and the flavoring herbs. Vegetables formed very important part of the diet in the biblical times. Two main types were used: those whose nutritious seeds could be easily stored and those which were eaten freshly gathered from gardens. Pulse seeds provided a useful source of vegetable protein, while fresh green vegetables were vitamin rich. Pulses could be eaten boiled, or their dried seeds could be ground up into flour and then made into nutritious soups. Fresh vegetables were eaten either raw or lightly cooked, usually by boiling in water. The general vegetables in the Bible are herbs(garden rocket), cucumber(snake cucumber), watermelon, leeks, chicory, and onions. Also the flavoring herbs in the Bible are rue, dill, cummin, black cummin, frankincense, cinnamon, cassia, myrrh, black mustard, coriander, mint, saffron, ginger grass, syrian hyssop, aloes(eagle wood), manna which have the flavor, aroma, and medical values. 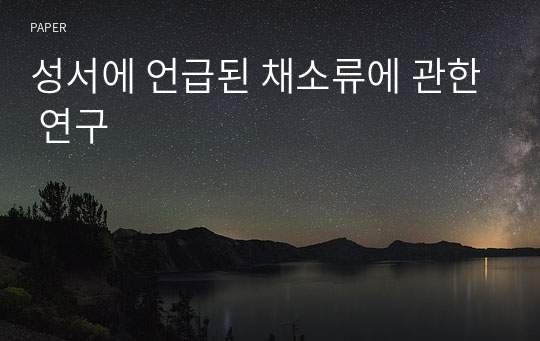