Differential capacity of the parthenogenetic embryonic stem cells (PESCs) is still under controversy and the mechanisms of its neural induction are yet poorly understood. Here we demonstrated neural lineage induction of PESCs by addition of insulin-like growth factor-2 (Igf2), which is an important factor for embryo organ development and a paternally expressed imprinting gene. Murine PESCs were aggregated to embryoid bodies (EBs) by suspension culture under the leukemia inhibitory factor-free condition for 4 days. To test the effect of exogenous Igf2, 30 ng/ml of Igf2 was supplemented to EBs induction medium. Then neural induction was carried out with serum-free medium containing insulin, transferrin, selenium, and fibronectin complex (ITSFn) for 12 days. Normal murine embryonic stem cells derived from fertilized embryos (ESCs) were used as the control group. Neural potential of differentiated PESCs and ESCs were analyzed by immunofluorescent labeling and real-time PCR assay (Nestin, neural progenitor marker; Tuj1, neuronal cell marker; GFAP, glial cell marker). The differentiated cells from both ESC and PESC showed heterogeneous population of Nestin, Tuj1, and GFAP positive cells. In terms of the level of gene expression, PESC showed 4 times higher level of GFAP expression than ESCs. After exposure to Igf2, the expression level of GFAP decreased both in derivatives of PESCs and ESCs. Interestingly, the expression level of Tuj1 increased only in ESCs, not in PESCs. The results show that IGF2 is a positive effector for suppressing over-expressed glial differentiation during neural induction of PESCs and for promoting neuronal differentiation of ESCs, while exogenous Igf2 could not accelerate the neuronal differentiation of PESCs. Although exogenous Igf2 promotes neuronal differentiation of normal ESCs, expression of endogenous Igf2 may be critical for initiating neuronal differentiation of pluripotent stem cells. The findings may contribute to understanding of the relationship between imprinting mechanism and neural differentiation and its application to neural tissue repair in the future. 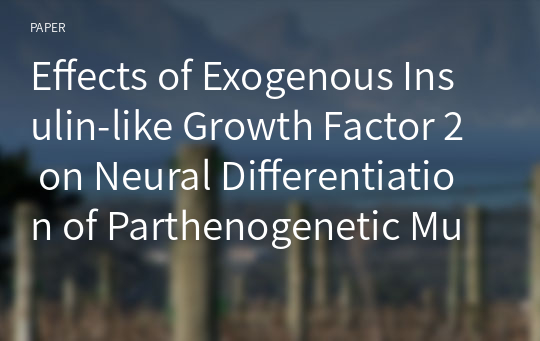