The aim of this study was to investigate what protein(s) of porcine epididymal fluid (pEF) are able to enhance the nuclear maturation of porcine germinal vesicle (GV) oocytes in vitro. Proteins of pEF were fractionated by affinity, ion exchange, and gel filtration chromatography. Porcine cumulus-oocytes complexes (COC) from follicles were cultured in tissue culture medium (TCM 199) containing various fractions obtained by chromatography. Porcine COCs were also cultured in TCM 199 containing various meiosis inhibitors and pEF. After 24 or 48 h culture, oocytes were examined for evidence of GV breakdown, metaphase I, anaphase-telophase I, and metaphase II. When porcine COCs were cultured in the medium with meiosis inhibitor such as, dibutyryl cAMP (dbcAMP) and forskolin (Fo), more than 80% of oocytes were unable to resume meiosis. However, porcine COCs supplemented with pEF were able to overcome the inhibitory effect of dbcAMP and Fo. Maturation rate of oocytes was significantly (p<0.05) increased in the media supplemented with cationic protein(s) during in vitro maturation than in those with anionic protein(s) (44.1% vs 20.0%). When oocytes were cultured in the TCM 199 with fractions obtained by gel filtration, the maturation rate of oocytes was significantly (p<0.05) higher in fraction 11 containing 18 kDa than other fractions. The present study suggests that 1) dbcAMP and Fo prevent the spontaneous maturation of oocyte after isolation from follicles, and that pEF contain a substance(s) that improves meiosis resumption in vitro of porcine COCs, 2) cationic 18 kDa protein(s) are responsible for promotion of MⅡ stage. 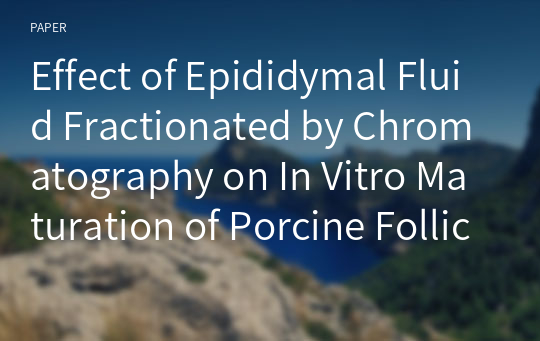