This article aims to reveal that Romeo and Juliet reach mutual recognition, which presupposes their individualities and their mutual understanding. Thereby they achieve a new way of love which had not been accepted in Western philosophical history. In addition, their mutual recognition started from their anti-social actions. Through their anti-social actions, Romeo and Juliet do not come to accept the ideological demands as they are; instead, they become to be independent selves. Namely, their secret love makes it possible for them to be the ones detached from the ideological demands, such as parents oppression, so they can obtain individualities that are freed from the world’s demands. Obtaining individualities leads to obtaining mutual recognition about each other. Romeo says if she (Juliet) does not like the names of ‘Romeo’ or ‘Montague’, he would renounce the both, which means that what is important to them is not the perspectives of the people and the world but how they regard each other. Regarding each other in a meaningful way leads to mutual recognition. Furthermore, they want to know more about each other. Really knowing each other signifies that they come to understand each other more and they recognize each other more. They love not because they want to satisfy their fantastical lack, but their love is based upon sincerity. This signifies that their love is self-fulfilling as it is, and is not that which tries to delay the satisfaction of love, and to make the other party tantalized. Regarding each other in a meaningful way and love based on sincerity can be called love of mutual recognition. 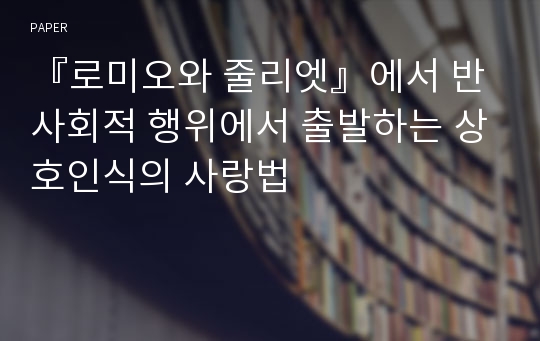