After the Second World War, the professional wrestling, one of popular sports, was introduced to Japan as part of the United States’ cultural policy toward Asia. The professional wrestling in Japan blossomed with the emergence of Yeokdosan, who was the famous professional wrestler and considered a national hero. The previous studies have highlighted the negative images of Yeokdosan by arguing that his popularity mirrored the anti-American nationalism of Japanese people and that he concealed that he was an ethnic Korean. However, this study clarified that the anti-American sentiment was fictional and that Japanese people were rather pro-American. Japanese people who suffered from the pain of a lost war found consolation in Yeokdosan who slammed down an oversized Western rival. Also, the Japanese society at that time actively utilized Yeokdosan as a tool to give encouragement to its people in order to boost the post-war economic development, and was trying to conceal Yeokdosan’s naturalization to a Japanese citizen more actively than himself, which was an inevitable choice for the wrestler due to severe discrimination against ethnic Koreans. Japan’s policy to priority the United States and downplay its Asian neighbors has not changed since the modern days, and the country’s pro-American sentiment is here to stay. 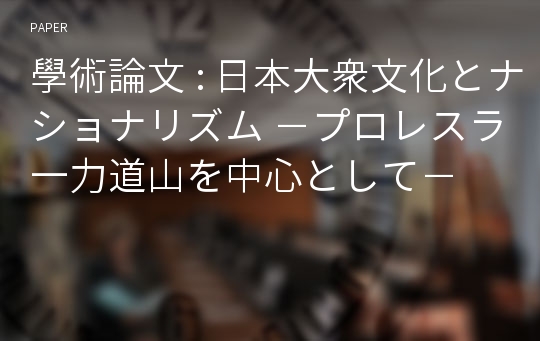