Since the eight Eastern European countries had established the governments of People``s Democracy after World War IT, they contributed to the political and economic setting of the USSR in international politics by entering into the sphere of Socialist Bloc. The term, "Eastern Europe," does not stem solely from the geographical meaning, more importantly, it denotes the conception of international politics. Hence, the Soviet Russia had bound up those countries closely to her by establishing the networks of the COMECON and the Warsaw Pact. However, Yugoslavia and Albania deviated from the orbit of the Soviet Satellites in 1948 and 1961, respectively. And Yugoslavia successfully carried political and economic reform, but Albania, to the contrary, dropped to a position of orphan in Eastern Europe. All of these Eastern European countries are by no means politically and econ-omically developed, after the period of 40 years under the control of the Soviet Union. Finally, the Eastern European countries began to recognize a simple fact that their social systems are not efficient enough to increase the living standard of people. At the present time, the Eastern European countries attempt to launch their re- forms as follows : First, they are going to accomplish the process of political pluralization. It contains the plural political party system, the plural candidates for the representative of parliament, the autonomical activities of the concerned interest groups, and the performance of parliament function to the degree of the western parlia-mentarism. For the achievement of plural political system, Hungaria had imported congressional election, in 1983. by the Plural Candidate Act, in addition, in the occasion of the Polish general election, held in June 1989. the Solidarity had overwhelmingly succeeded over the Communist candidates. As a result, the Polish had established a non -Communist coalition government, for the first time, in Eastern Europe. This is by all means a revolutionary event. The Polish government will he changed to a totally different form of the communist ruling system, or at least, it signifies a highly significant loosening from the rigidity of Communist monolithic government in the future. Second, the reform of economic system is also concerned with the process of pluralization. The most Eastern European states have hold highly centralized planned economic system. It does not permit on wage system, based on the belief of individual incentive, in economic activities. The reform of economic system is designed to introduce the planned -andguided market socialism or the market socialism itself, just like the case of Yug-oslavia, As of now, Poland provides a good example of the political reform, while Hungaria is cited as a model for the economic reform. On the other side, Czechoslovakia, East Germany and Rumania appear to be eager to hold the centralized ruling system. However, the trend of international society does not likely to permit the Soviet intervention in the affairs of Eastern European countries. The Soviet intervention under the Breznev doctrine of 1968 into the Czech affairs is not likely to be reproduced in the future. 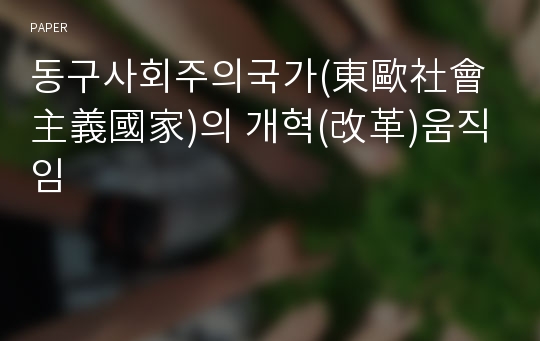