The Soviet Union first proposed the Conference on Security and Cooperation in Europe(CSCE} at the Berlin meeting of Foreign Ministers held on February 10,1954. She long had sought Western recognition of her postwar position in Eastern Europe through the principle of frontiers`` inviolability. She also wished to introduce the East Germany into the community of nations through CSCE, although the Western countries were negative about the CSCE. Thus the Soviet Union tried to weaken the USA hegemony from the Europe. In spite of different interests of respective countries on CSCE, the 35 countries (Canada, the USA and all European countries excluding Albania) signed the Final Act of the CSCE in Helsinki on August 1,1975. There have been three follow-up meetings in Belgrade(l977-1978), Madrid(l980). and Vienna(l986-1989) since the Helsinki Final Act. The Final Act (l975 ) is divided into four "Baskets." Basket 1 deals with the questions of security in Europe and includes a declaration of guiding principles to be observed by participating states. The principle 7 of the declaration relating to the respect for human rights and fundamental freedoms served important roles for later policies of the Western countries, especially the West Germany. Basket IT deals with the questions of cooperation in the fields of economics, science and technology, and the environment. Basket ill deals with cooperation in humanitarian and other fields. It is concerned with problems of human contacts and information exchange. This was of the greatest interest to the West Germany and perhaps has given the most important. influence on subsequent events in Europe. The West tried to blow in the wind of freedom into the Eastern Europe through the clause of practice of "in violability of frontiers" in the Basket I, because her principle objective at the CSCE was to obtain general Western acceptance of existing frontiers. But the principle of "inviolability of frontiers" meant for the West Germany an eternal division. So the West Germany strongly rejected it, and proposed a reservation clause to the "inviolability of frontiers" to read "the participating states consider that their frontiers can be changed only in accordance with international law by peaceful means and by agreement." In addition, the west Gerrnanv inserted the principle of self-determination into the Basket I. This left open the possibility of reunification of the two Germanys. But the CSSR objected to inclusion of the principle of self-determination in Basket I and of "human rights" clause in Basket ill, arguing it can be "Trojan Horse" or at the least the "Pandora``s Box", However, the clause of human rights emerged as the conternrious issues between the West and the East at the follow-up meeting of CSCE because of different conception of human rights. The West stressed the political and civil rights, while the East emphasized economic. social and cultural rights. In the Madrid follow-up meeting the West and the East made a great progress in the field of the humanitarian contacts. The Vienna agreement(l9S9) had the East European regime to commit to a greater respect for human rights than ever before. This has brought about a great change in the society of East Europe, including the East Germany. This heightens the possibility of reunification by the principle of seif-deterrnation of the German People. The emphasis of human rights at multilateral dimension like the CSCE gives us lessons for the Unification of Korean Peninsula in the future. 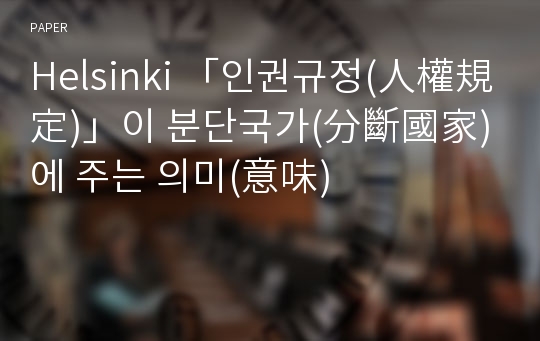